Disenfranchisement Is Alive and Well in the U.S. 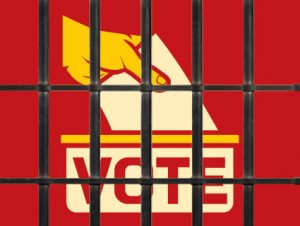 Disenfranchisement of minority communities means that they are vastly underrepresented at the voting booth on election days. Photo: Shutterstock

“Disenfranchisement: to take away power or opportunities, especially the right to vote, from a person or group.” (Cambridge English Dictionary) Throughout history, America has had a record of disenfranchising groups of people, including Native Americans, women, LGBT people, Japanese people and black people. In 2019, all of these groups have the right to vote and all of the rights outlined in the Bill of Rights; however, disenfranchisement still persists. How is this?

Well, one reason is the systematic destabilization of minority communities. Two such communities are Native American reservations and places classified as “the hood.” When Native Americans were forced onto reservations through the decades through violence and murder, America did its best to make it seem as if things would be good for them there. Those in power wanted to make it seem as if they were being benevolent and merciful, even though they snatched land from Native Americans and herded them along the Trail of Tears, wiping out their population.

In 1491, about 145 million people lived in the Western Hemisphere. However, by 1691, that number had declined by 90-95 percent, or 130 million people. This genocide began with the landing of Christopher Columbus, and yet he is still celebrated as an American hero.

The real question is, how does this attack on Native American people affect their present day livelihood?

More than four in five Native American women have experienced violence, and more than one in two have experienced sexual violence. There is an acronym for women who have fallen victim to this statistic but who have not been found: MMIW. This stands for missing and murdered indigenous women. Native Americans are murdered by the police the most (second are black men). In addition, people attempt to build pipelines underneath Native American reservations and hurt sacred waters.

Like Native Americans, black people gained their civil rights fairly recently, with the passage of the Civil Rights Act in 1964. However, even after that, it was hard to find employment that was on par with their needs and skills, and it was impossible to find a position that would pay the same amount as a white person would earn doing the same job.

So, black people lack the “old money” that many white Americans have which dates back to the Confederacy, especially in the South. During the Great Depression, the government decided to build housing projects in existing ghettos or undeveloped areas; this was where city planners hoped to shift black populations. However, white housing projects were built in existing white neighborhoods.

In the mid-1930s, the government began to lure white families out of housing projects with federally insured mortgages that subsidized relocation to new single-family homes in the suburbs. However, they failed to do the same with black families, leaving them no way out of the trap they had been led into. In fact, the government had an explicit policy of not insuring suburban mortgages for black people.

In suburban Nassau county (just east of Queens, New York), Levittown was built in 1947. It included 17,500 mass produced two-bedroom homes. They required nothing down and a monthly payment of about 60 dollars. However, at the Federal Housing Administration’s (FHA) insistence, developer William Levitt did not sell homes to blacks, and prohibited all resales of this nature.

The projects became a well-known danger hotspot, a last resort. They were overcrowded and a health risk for anyone who lived there, especially children. Gangs sprouted in and around them – at first as protection for black people, like the Black Panthers, but finally devolving into what we know them as today.

Today, the housing projects are much less prominent. It is unlikely that you will meet very many people who actually live in one of the original housing projects. However, places of the same nature still exist, and in abundance. In Georgia, inner-city areas, commonly referred to as “the hood,” exist throughout Atlanta. Gang violence is common here.

They are predominantly lived in by black and Hispanic people, which is where the stereotype that all black people live in hoods comes from. This is not true. Just because hoods have a lot of black people in them does NOT mean that black people do not live outside of them.

Not only are hoods detrimental to the development and come-up of African Americans, they leave those who grow up in them at a significant disadvantage. The most common dialect spoken in these areas is African American Vernacular English (AAVE). This is where most common internet slang comes from. However, for non-white people, speaking like this can lead to being unable to secure a job through a phone interview, being discounted as less intelligent, and being ignored in academic settings.

Unfortunately, though AAVE is officially recognized as a form of English, in the same way that British English is recognized, it is thought to be unprofessional. This often leads to black people dropping these accents in majority-white or professional settings, to be more accepted. This was shown in the movie/book “The Hate U Give.”

Disenfranchisement is alive and well. It not only affected minority communities in the past, but affects them in the present, too. The only way to move forward is to acknowledge this wrongdoing and to take steps to correct it. This requires an extra focus on minorities, only until they are at the same level as the majority, economically and in terms of other measures.

You can tie this in with the affirmative action debate; people of color are not taking your jobs or spots in college. We are taking the jobs and spots that should have been afforded to us long ago. People are angry about this and yet they fail to recognize the fact that many colleges have less than a 5 percent minority population. Disenfranchisement is real and thriving, and the majority has a responsibility to recognize it, too.