Despite its Benefits, Technology Can Be Detrimental to Your Education 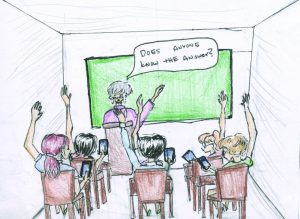 A Pace sophomore puts her phone in another room in order to carve out uninterrupted time to get her homework done. After completing her assignments, she learns that her father has called her six times, growing more frantic with each unanswered call. Another Pace sophomore forgoes checking his email after 9 p.m. so he’s not tempted to indulge in all the distractions his phone has to offer. In the morning he discovers that a homework assignment was posted to Google Classroom at 9:15 p.m., and he won’t have an opportunity to complete the assignment before class that day.

The above are common occurrences that illustrate obstacles students face in balancing the benefits and pitfalls of technology. Students are aware of the downsides of technology and are trying to cut back on their usage of it, but it’s not so easy.  Technology has the power to substantially enhance educational experiences, but only if students understand that it is just a tool, not the sole answer to every educational need. Schools and students need to change their mentalities on how they use technology in order to reduce distractibility and stress, and encourage original thought.

It’s generally accepted that technology’s ability to give students access to millions of sources, articles and bits of information instantly can have a huge positive influence on education and life in general. However, does a child’s improved efficiency in accessing  content make him more knowledgeable? When a teacher poses a question in class and the students all race to type it into their web browsers, is the student who could find the answer quickest therefore the smartest?

The Knightly News thinks not. The minimal effort required to access the answers does not actually help us learn. Many of those facts discovered in the fraction of a second online are quickly forgotten. According to Tomas Chamorro-Premuzic, Ph.D., a Business Psychology professor at Columbia University, humans’ “ability to solve problems depends not on the knowledge they can store but on their capacity to connect to a place where they can retrieve the answer to find a solution.” But this incessant hyper-linking breeds classroom dynamics where students master the art of appearing to know the information, when in reality, they do not.

Just as schools once debated over whether or not certain types of calculators should be allowed in class for fear that they enabled mathematically-challenged students to avoid working out problems themselves, people are divided over the effects of classroom technologies. In 2012, the Pew Research Center conducted studies regarding this divide. Their results concluded that while 55% of people believe this generation’s constant connectivity will produce “nimble, quick-acting multi-taskers,” 42% argue that students are training to have a “thirst for instant gratification, settle for quick choices and lack patience.” How does this play out in school?

Helene Hembrooke and Geri Gay, who both work for Cornell University’s Human Computer Interaction Group, conducted a study in 2003 called “The Laptop and the Lecture.” In the study, two groups of students sat through the same upper-level Communications lecture, but only one group was allowed to use their computers and phones for note-taking, web-surfing and further research.

Immediately after the lecture, both groups took the same exam, but the non-technology-using group scored significantly higher. The results highlight a technology-induced lack of retention, and even hint at the proven theory that students who write down their notes with pen and paper learn more effectively than those who type them.

This technological dependency and resulting educational deficiency affects high school students in many ways. For example, Dra. Pontes’ Spanish class syllabus reads in all caps: “DO NOT TRANSLATE OR USE INTERNET TRANSLATION.” She understands how students’ easy access to technologies, especially while at home doing their homework, tempts them into taking short-cuts and using the internet to complete their tasks more easily. But, increased speed of completion does not correlate to deeper understanding of content, and on test day, those students will be at a disadvantage.

Another example is how technology has led students to rely heavily on Quizlet as a study resource, further developing an instant-gratification and memorization-focused study approach. In her classroom, upper school history teacher Emily Stevens stresses the importance of studying beyond this rote memorization, urging students to find connections, parallels and applications. In other words, students need to work hard in order to fully understand material, yet technology provides a easy way out.

Not only does technology allow for less effective studying and comprehension if used carelessly, it also creates a platform where unoriginality and blatant plagiarism materialize frequently. It is so rare for a student to have a prolonged period of time where they can truly come up with their own ideas because of perpetual contact with the internet and mass media. Thus, it’s become a normality for students to steal ideas from prewritten essays and websites like SparkNotes to avoid the drawn-out process of deriving their own arguments.

A survey conducted by Vacaville Reporter found that 60.3% of AP English students had used SparkNotes’ pre-written conclusions to formulate their “own” thoughts on literature, with an outstanding 18% who admitted to relying solely on SparkNotes for academic success.

Imagine how deficient and unoriginal a student’s brain will become the more often he avoids developing his own thoughts by engaging with the internet, a captivating and never-ending connectivity which seemingly already supplies the answers to every thinkable question.

Additionally, technology can infringe upon a student’s independence and freedom – as well as on their teachers’. Today’s youth are indisputably addicted to their electronic devices and increasingly enslaved by “the grid.” It’s nearly impossible to go five minutes without receiving a text message, email, Snapchat alert or social media notification.

But on top of the social distraction, a new layer of academic entrapment has been perpetrated upon today’s students with the advancement of technology’s role in education. Pace students and teachers have their own email addresses for continuous communication, and the adoption of Google Classroom has provided an outlet for round-the-clock contact. But is this always a good thing?

It would be an incomplete picture to list the negatives of this constant interaction without acknowledging its evident benefits. Of course, it is an amazing asset to education for the student to communicate with his teacher after school hours and to have access to that lifeline of scholarly support. But, numerous students have acknowledged the false illusion that they can depend upon the teacher to always upload homework and due dates online. Thus, students often forget to complete work that was mentioned in class but not posted on Google Classroom, assuming that it’s the teacher’s responsibility to always remind students of upcoming assignments.

Also, many students feel as though certain teachers misuse Google Classroom by posting assignments too late at night or in the middle of the weekend. In this new digital age, it’s important to ask when and where a teacher’s control over their classroom ends, and if it is acceptable to require students to check online platforms such as Google Classroom multiple times a day just to stay on top of their schoolwork.

There are no definite or perfect answers. Unplugging is unsustainable and disregards the truly wonderful things that technology can offer. But, students must fundamentally change the way that they approach technology in order to avoid immense problems such as extreme attachment to their devices, and lack of creativity and productivity. Students must acknowledge that originality and true academic success come from within each individual, not computers. It is time to reclaim our educations from our screens and treat technology as merely the tool that it was designed to be.