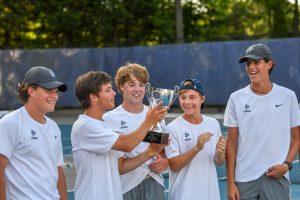 In their fourth state championship appearance in five years, the boys varsity tennis team defeated Lovett 3-2 on May 6 to claim the title of state champions for the first time since the early 2000s. It was a hard-fought victory, with the No. 1 doubles team of senior Charlie Hirsch and junior Rohan Jatar playing for close to three hours to break a 2-2 tie to determine the outcome. Others winning their matches were the No. 2 doubles team of sophomores Jordy Elster and Matt Genser, and junior Neil Sashti in the No. 3 singles spot.

The only match that weighed in the balance in the championship was No. 1 doubles. “It was really intense being the last ones on the court for so long,” said Jatar. “The support from the fans is what made the difference and helped us win.”

The team also defeated Lovett to win the region championship on April 4, completing their undefeated regular season record. “The moment I knew we had something special was in our region championship win against Lovett,” said head tennis coach Neil DeRosa. “It was a very tough, gritty match; they pushed us as far as we could go.” It was a very proud moment for the whole team as they felt they had grown together a lot since the start of the season.

The boys also secured many impressive wins before the region championship, beating Greater Atlanta Christian, Westminster, Lovett, Woodward and Walton in the regular season. Coach DeRosa credits the team’s success throughout the regular season to the team’s depth. “Tennis is an interesting sport because it is about match-ups, and we have a solid ‘one through five’ which allows us to match up well against almost every team we face,” he said. The depth has allowed them to beat teams with a few stars at the top that lack the depth that the Pace team had this year.

The team also has been successful because they play for each other and are a very close team. “We are all friends and as the season progressed we got closer and closer,” said Genser. As the competition got tougher, so did the boys’ unity and willingness to win, pushing each other in practice to get better every day.

The team headed into the playoffs with a number one seed. “It is really exciting to get this opportunity as a sophomore,” said Elster, as they began their playoff run. The boys beat their first two opponents in the playoffs, Franklin County and Murray County, by a score of 3-0. They moved into the Elite Eight and then the Final Four against stronger opponents, Benedictine and Jefferson, but the boys did not sway and beat them 3-0 and 3-1, respectively.

Senior captain Charlie Hirsch understood this was his last chance to win it all and also what it would take to succeed. “A lot has to go right to win state, and in the pre-championship huddle, I saw it in everyone’s eyes,” said Hirsch. “I saw in my teammates the blend of skill, tenacity and love that we needed to win, and I will never forget it.”