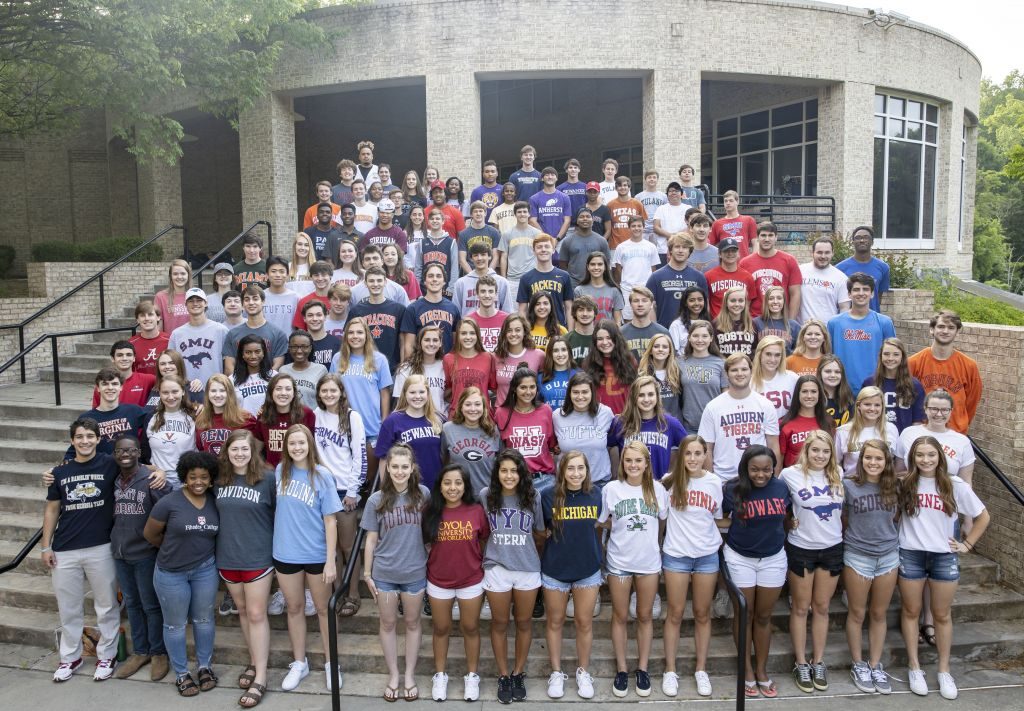 Although the class of 2019 says goodbye to Pace, they are excited for the opportunities to come in college. Photo: Omar López Thismón

After years of tireless work in academics, athletics and the arts, the senior class of 2019 has finally completed their time at Pace Academy and is ready to move onward. The seniors, who have spent their high school years preparing for graduation, will now go off to entirely new environments, leaving behind Pace, their teachers, coaches and peers. However, no matter where the students go, they will take with them their memories and the skills and knowledge that they gained from their Pace experience.

In the graduating class, there are 31 students who have been around for the long haul, having started at Pace as pre-firsters. These students, known as “lifers,” have spent 13 years – over half of their lives – with the same people. “It has been crazy knowing people for so long, but watching everyone grow up together has been really cool,” said senior Blair Myers, who heads to Winston Salem this fall to attend Wake Forest University. “Pace has definitely changed over the years.”

The seniors will be traveling across the country to 23 different states and the District of Columbia. The state of North Carolina will be taking 12 Pace seniors, with six students planning to attend Wake Forest University. Texas is also a hot spot, attracting nine total students including five students headed to Southern Methodist University in Dallas. Another five students will attend the University of Virginia next year.

Of the 119 seniors, only 12 have elected to study in-state, with students headed to four schools: Emory University, Georgia Tech, Mercer University and the University of Georgia. Although no seniors are headed to international destinations, five students are traveling across the country to California, with three – Calla Kaminsky, Will Funston and Hannah White – going to the University of Southern California. Region champ in the 400 meters Justice Jackson will head to Pepperdine University to continue her track career.

The hard work that each student put into all four years of high school, along with the excellent education and unconditional support that the teachers provided, have helped make this senior class an exceptional group. For example, senior Charlie Hirsch is headed to the University of North Carolina at Chapel Hill, having received the Morehead-Cain scholarship, which awards students for their leadership, character and scholarship. While at Pace, he also received the STAR student award, recognizing the student with the highest cumulative SAT score at their school.

This year’s senior class, although talented on many fronts, has an especially exceptional group of athletes, with 23 students pursuing their sport on the college level. These students have had to manage their time to be able to perform well in the classroom and on the field. “My teachers and coaches have been very helpful in high school, as they have always wanted the best for me,” said senior Sam Assaf, who will be playing lacrosse at Amherst College next year. “What I have learned in school has helped me on the field, and vice versa, which is great.”

This group of seniors not only succeeded in athletics, but broke records, won state championships and made history with athletic feats and state recognitions. The girls varsity volleyball team won two straight state championships, with leadership from seven seniors, including six players and one manager. “Being on back-to-back state teams with the same group of seniors both years was super cool,” said senior Paige Fleming. “We definitely all grew close when we otherwise wouldn’t have, and winning senior year as well was special for all of us to do together.”

Senior Charlie Kaye was exceptional in the swimming realm, wrapping up his Pace career by earning the Iron Knight award and winning state titles in the 100 freestyle and the 100 backstroke. “Winning two state titles was the goal I set for myself in high school, and I knew if I worked hard leading up to the state meet, I could do it,” said Kaye. “I was really happy with the outcome.” Kaye will continue his swimming career in Dallas at SMU next fall.

Numerous students received recognition for their dedication and passion for the arts, including ceramics, painting, sculpture and photography. Senior Conor Hartman was an arts laureate this year, gaining recognition for her work in ceramics. She received two Honorable Mentions and a Silver Key in the Scholastic Arts Awards.

Other senior recipients of Scholastic Arts Awards include Jared Rayman, winning a Gold Key, Silver Key and Honorable Mention for ceramics, and Chase Karamanolis, earning a Silver Key for ceramics. “I am thankful for the opportunity Pace has provided me to develop my skills and push myself further in my artwork,” said Hartman. “The arts faculty has always helped me to become better, which I am grateful for.”

Another group of talented seniors were involved in the performing arts, whether it be in chorus, orchestra, band or theatre. Seniors played important roles in this year’s plays and musicals, including “Beauty and the Beast,” “Almost, Maine,” the Winter Showcase and “Disaster!” Senior Grace Pottorff, who was involved in 22 theatre productions at Pace, was the the GHSA Female Solo State Champion for singing.

Others cherish the smaller moments that defined their high school years. “My favorite memory is just hanging out in the Commons with all of my friends,” said senior Cooper Selig, who will be attending Tulane University. “I am going to miss knowing everyone I walk by in school and just being close with my friends.”

Senior Devan Johnson, who will be attending Wake Forest University and will be a member of the cheer team, said that she will miss Pace immensely. “These four years have had their ups and downs, but I can honestly say I am leaving here with 119 people that will always have my back,” said Johnson. “Pace is one special place, and I hope all the underclassmen seize every last moment here.”

Senior Dean Erica Barbakow, who has been with the seniors since freshman year, has thoroughly loved getting to be a part of their high school experience and being able to form a connection with each student in the class. “I would characterize the Class of 2019 as the most spirited and fun-loving group I’ve ever worked with,” said Ms. Barbakow. “Simply put, I will miss them tremendously. I wish them all nothing but the best, and I can’t wait to see the ways in which they soar.”