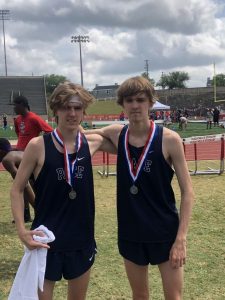 Eleven Pace Knights qualified for the track and field state championships in Albany, Georgia on May 9-11. There were so many amazing performances from both veterans and first-time state qualifiers.

The first night of action had juniors Sam and George Adams qualifying for the 800m finals. We had hoped to go into this race and not have to push too hard to qualify. But with the luck of the draw, the five fastest people in the 800 were placed in the same heat. They had to race hard, hitting 1:57, and were set up to move on to the finals on Saturday.

Sophomore Alexander Swann was up next in the 300 hurdles. Zander has come so far since last year in the hurdles with so much potential to become great in this event. He didn’t make the finals, but performed like a state veteran at the meet.

The next event was rough for us– something happened during a handoff of the baton in the 4 X 400 relay and it ended up on the track. Even with picking it up and getting close to getting back in the race, it simply wasn’t enough to earn us a spot in the finals.

Freshman Edward Blaha was up next in the 3200 meters, but after spending an hour warming up, the event was postponed due to inclement weather that was heading toward Albany. We all cleared the stadium in pouring rain, and caught our tent that had become a kite in the open field.

We returned to the stadium early the next morning for perfect racing conditions for the 3200. And Edward took full advantage of this weather – as a freshman he ran like a veteran and put up a time that was 11 seconds faster than his PR, posting a time of 9:40. This placed him 5th overall and earned him the school record for the event.

Sophomore Justin Johnson was up next in the shot put. This guy had never thrown before in his life and with only two months of training, he qualified for state – pretty amazing feat in such a short time. Justin finished off the podium, but had a great season.

Senior Justice Jackson was next up in the prelims, and she made it look easy qualifying for finals in the 400 meters. Sophomore Laura Romig made the 800 qualifying look like an everyday occurrence. She ran a smart race and set her spot for the finals.

After taking an AP exam in the morning, George Adams toed the line for the 1600 meters later in the evening. Out of our sectionals alone it took a 4:27 to qualify for State – a 4:28 was sitting at home. George ran a smart race and went after it. He placed 3rd on the podium with a new PR of 4:23, which also broke his own school record of 4:25.

Juniors Payton Payne and Paula Sandoval competed in the last race of the evening, the 3200m. They both had sat through AP exams that day (Paula actually took two). They finished the evening with Payton finishing 4th and Paula placing 5th place on the podium with a new PR.

Going into finals on Saturday the meet started two hours earlier than planned due to more rough weather heading into the area. Jackson was first on the track in the finals and put points on the board with her 6th place finish in the 400. Romig took to the track and had an amazing race in the 800 meters. She placed 4th with a new PR of 2:20 – the fastest for a Pace girl in quite a few years. With only four girls qualifying for the state meet, these girls placed 8th out of 32 teams, quite an amazing performance.

The Adams twins were next in the 800. We knew going into this race that it was going to be very tight and tactical – and we were proved right. The best way to describe this race is simply WOW. If you haven’t seen the video of the tight finish go to gamilesplit.com and search videos for the 3A state boys 800 meters. The moves both of these boys made were unbelievable.

George ended up crossing first in 1:56.12 and is the 3A state champion while Sam was state runner up with 1:56.40. Their performance garnered them an invite to the Meet of Champions on May 17 at 8:00 p.m. at Marietta High School. It would be great if we could get these guys some fans to line the fence that day.

Once the points were added on the boys side, they placed 9th out of 34 teams. Hats off to this year’s track and field team. They had an amazing overall work ethic and it paid off. Congrats on the season!