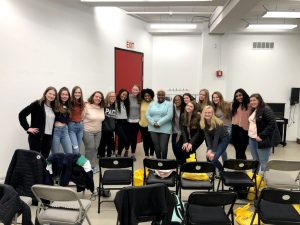 Seeing five shows in one weekend in New York City may seem like a dream, but for 16 Pace students, it became a reality. Led by upper school Visual and Performing Arts Chairperson Sean Bryan and upper school history teacher Caitlin Terry, 13 freshmen and three seniors traveled to the Big Apple April 4-8. Five shows, a Q&A with a Broadway actress, and several days of touring one of the most famous cities later, these Pace drama devotees acquired new experiences and knowledge that will aid their future theatrical endeavors.

Besides seeing shows on and off Broadway, students toured the NBC Studios, as well as Radio City Music Hall where they met a Rockette. However, perhaps the most interesting part of the trip was getting to meet Lacretta Nicole, the actress who made her Broadway debut playing Levora in the original production of “Disaster!”

During their Q&A session, students were able to ask questions relating to show business and what the life of a Broadway actress looks like, as well as specific questions about “Disaster!” which Pace performed April 25-27. “She talked about the several aspects of her career and how they differ from each other,” said freshman Maggie Pope. “She also discussed ways to improve your acting and singing, as well as keeping your voice healthy.”

Of the several shows that Pace students were able to see, “Mean Girls” was a favorite. However, shows such as “Avenue Q,” “The Band’s Visit,” “My Fair Lady” and “The Play That Goes Wrong” taught students about the importance and beauty of aspects such as set and costume design. “The production, the set, the music, the house that was on a turntable so that they could walk through… it was all extraordinary,” said Mrs. Terry.

She also had a positive outlook on a show that was not as popular among the upper schoolers, “The Band’s Visit.” “I like stories about complex characters, and I liked that it was music that you don’t typically hear on Broadway, as well as in everyday life.” Mr. Bryan praised the show as well, saying that it was “gorgeous in its simplicity.”

The variety of shows allowed students to see different levels of production and genres of music, as well as a wide range of theatre from classics to comedy. “I loved getting to see so many different shows on and off Broadway,” said freshman Shalizeh Thobani. “Especially since many were shows that I usually wouldn’t go to see.”