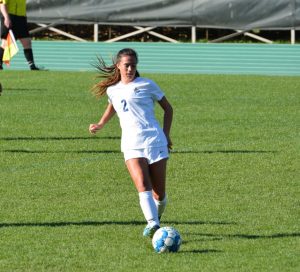 The varsity girls soccer team faced Jefferson High School for the first round of the state playoffs on April 23. Although the Knights dominated both halves, keeping possession for most of the game, regulation time ended in a 0-0 tie and the girls headed into a 15-minute overtime. The game ultimately came down to penalty kicks and a final score of 6-7.

“It was a heartbreaking ending to our season,” said assistant coach Kim Goodstadt. “I am so proud of the team, though, for fighting until the very end. They left it all out on the field and unfortunately, it just didn’t work out in our favor.”

The team had a season full of shutout wins as well as disappointing defeats. They kicked off their season against Dunwoody High School at home on Feb. 1. Though it resulted in a 0-2 loss, they dominated their first region game two weeks later against Towers High School 10-0.

This season, the team was composed of 28 girls, eight of whom were seniors. Head coach Liz Tutt was grateful to have so many seniors on the team because they provided extra leadership on and off the field. “The seniors are fantastic,” she said earlier in the season. “They are well experienced, well groomed, good leaders and they are fun to be around, so it’s the perfect scenario with all these freshmen that we have.”

Out of the eight seniors, half of them were captains. “They do a lot in terms of setting the tone and attitude that we want the younger girls to model,” said assistant coach Caitlin Terry. Assistant coach Kimberly Goodstadt agrees. I think it also helps having a few seniors that have played soccer at a higher level,” she said. “I think the younger girls definitely look up to them in that respect and want to achieve the same things that they have achieved.”

Senior Kayla Ross was one of those role model players. Ross, who served as one of the four captains, is committed to play NCAA Division I soccer at Boston University next year. This was her second year being a captain on the team, and she enjoyed the responsibilities that come with being a leader. “I liked getting to know the younger players and helping Coach Tutt,” said Ross.

Senior Devan Johnson took on the role of captain for the first time this year. “It’s a lot of pressure because you’re on the field, so you have to be leading and making sure everyone’s attitude stays up, but also making sure everyone is doing what they are supposed to do,” said Johnson. Johnson also had a lot of fun on the team, both during games and during practices. “We do a lot of possession activities, and then we usually end practice with a fun game or scrimmage to just keep things happy and fun,” said Johnson.

The girls ended the regular season with a record of 7-7. All the coaches are proud of the season the girls had as well as the effort and heart that went into every practice drill and possession in games. Coach Goodstadt said that the girls worked hard throughout the season, and she is optimistic about the future. “They deserved more than that, but it’s a learning experience and I look forward to next year,” she said.