Remembering the Holocaust: The Days of Remembrance 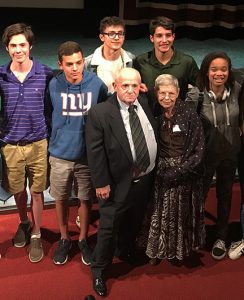 Herschel Greenblat talks to a group of students about his childhood during the Holocaust on Oct. 17. Pictured (L-R): Jake Buffenbarger, Gabriel Kadoori, Blaise Reyes, Jacob Sloman and Kellee Kindle along with Mr. and Mrs. Greenblat. Photo: Joanne Brown

In 1982, the United States Congress established the Days of Remembrance as an annual commemoration of the horrific events that occurred during the Holocaust. The Days of Remembrance take place from the Sunday before Yom HaShoah until the following Sunday. Yom HaShoah, which translated from Hebrew means “Holocaust Remembrance Day,” is Israel’s day to remember the approximately 6 million Jews who were killed.

Rabbi Joshua Heller of Congregation B’nai Torah believes everybody, no matter their religion, should partake in remembering. “Whether you are Jewish or any other group, these days are a reminder how dangerous hatred and racism can be, and we all need to be vigilant against discrimination and racism,” said Rabbi Heller.

This year, the Days of Remembrance begin on April 28 and continue until May 5. The United States Holocaust Memorial Museum will commemorate the Days of Remembrance on May 2. This will also be the 76th anniversary of the Warsaw Ghetto Uprising in 1943. Every year, the museum leads ceremonies and encourages observances throughout the country. Name reading is one of the most prominent traditions; people will take turns reading lists of names of men, women and children who were killed during the Holocaust.

There are also remembrance services going on all over Atlanta. The Marcus Jewish Community Center will be hosting a remembrance ceremony on April 28 at the Besser Holocaust Memorial Garden. The Breman Museum is hosting their 54th annual community-wide Holocaust Commemoration on May 5 at 11:00 a.m. at the Greenwood Cemetery. The service will feature Holocaust survivor Hershel Greenblat who came to share his story at Pace on Oct. 17.