Will ‘Disaster!’ Be a Disaster? 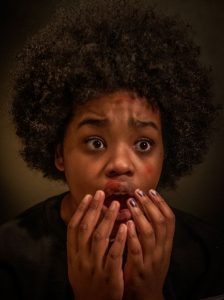 Senior Raina Williams will transform herself in the role of Levora, a so-called glamorous disco diva. Photo: Laura Inman

The answer is: absolutely not! Encouraged by the great success of this year’s earlier productions “Almost, Maine” and “Beauty and the Beast,” the Pace thespians will enthusiastically debut the spring musical comedy “Disaster!” April 25-27. Tickets can be purchased now through the Pace website or here: https://pace.booktix.com/

Set in 1979 New York City, the show parodies the slew of disaster films that were popular during that era. “Disaster!” brings to life the grand opening of a popular floating casino and discotheque, when a series of natural disasters, like earthquakes, tidal waves and infernos, plague the night of boogie-fever.

The show weaves together the iconic melodies of 1970s hits, like “Hooked on a Feeling,” “I Will Survive” and “Still the One,” to name a few. Audience members will find it hard to resist the urge to bop and groove in their seats, as those disco vibes are more infectious than the flu.

While the show is only as powerful as its ensemble, there are a few stand-out characters, set apart because of their unique humor and interesting motives. One of these characters is Shirley, a “lovable and jolly Jewish woman,” as described by Musical Theatre International, who will be played by senior Emily Schmitt. “Shirley is a pretty eccentric personality, so getting to play someone who is so different from myself is really challenging but really fun,” said Schmitt. Playing Shirley’s dedicated and equally jolly husband, Maury, is junior Austin Fuller.

Senior Margaret Bethel will star as the feminist journalist Marianne. “I like playing Marianne because she has a really interesting character arc and some fun songs,” said Bethel. Playing Jackie, the iconic lounge singer who later falls in love with senior Jeremy Levin’s character, Ted, is talented sophomore Audrey Holton. “I love that some parts of Jackie’s personality are like mine, but it’s also awesome to discover how different we are,” said Holton. “A lot of people misread Jackie’s bubbly personality, believing she isn’t that complicated when in reality she is lonely and struggling to find a voice that her counterparts will listen to.”

While the aforementioned characters and actors are sure to be crowd-pleasers, they are not the only leads and certainly not the only highlights of the show. “‘Disaster!’ is special because it features lots of different leads rather than a singular one,” said sophomore Jack Brown, who will be playing Tony, the flirtatious owner of the ship. See “Disaster!” for show-stopping dance numbers, classic 70s music and hilarious characters.