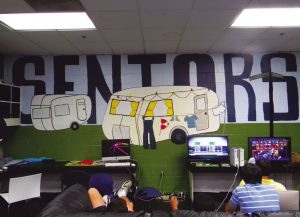 Past students relax in in the old senior cellar. Photo: Wylie Heiner.

It’s official. This summer, Pace will begin the process of moving the art supplies out of and the couches and ping pong tables into the space formerly occupied by the senior cellar. The cellar has been in its new location for three years. Now, Head of Upper School Michael Gannon and Head of School Fred Assaf have decided that moving it back to its original location will do many good things for the school. “For the good of the overall community and culture of Pace, I we’ve concluded that the senior cellar is more important than middle school art,” said Mr. Assaf.

“I remember when we were lower schoolers we would walk by and think ‘I cannot wait to hang out in there,’” said sophomore Rivers Graham. The old senior cellar was located to the right of the athletics offices in the Inman Center. It was a welcoming environment full of light, and offered the senior class a sanctuary to hang out, play ping pong, play Nintendo 64 and their all time favorite, “Guitar Hero.” But the middle school art program claimed they needed more space for teaching, forcing the senior cellar to be relocated down the hall to a cramped and dark room.

The current cellar space features a ping pong table that stretches wall to wall, leaving no room for the players to move around, and two small leather couches, big enough for about three people each. The space has been taken over by a group of eight boys, and it rarely attracts any new faces. This environment has not been inclusive to everyone and has left many people feeling disappointed.

“You know, it’s just upsetting that we did not get to have the experience of the old senior cellar,” said senior Brogan Smith. “At least the future seniors will get it back.” The juniors this year are really excited to turn the cellar around next year in the new location.

“I have never been more excited than I was when I heard the senior cellar was returning,” said junior Mbiti Williams. The new environment will help build community among next year’s senior class.

This leaves the middle school the small room down the hall. Middle school art teacher Katy Cowles was disappointed, but is trying to think positively. Although the new art space will be smaller, she said that “there should be plenty of room if some people double up on seats.”