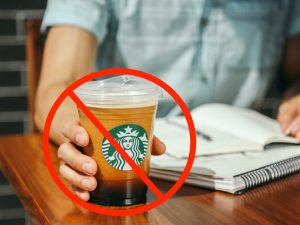 Starbucks announces that they will stop production of their “sippy cup” lids and return to using plastic straws. Photo: Kathryn Hood

On July 9, 2018, Starbucks CEO Kevin Johnson announced that the company would be removing all plastic straws from their locations by 2020.

While this was met with positive press coverage at the time of its announcement, the attention seems to have died down, giving executives time to rethink. Instead of coming up with a zany new drink, as they typically would, they decided that this month’s way to increase sales and attention would be to announce that they are revoking their promise and will return to using plastic straws.

Starbucks has also offered compostable straws for their blended drinks, such as Frappuccinos. However, these straws were only made available to those who requested them, and according to Johnson, so few people knew of this item that it did not make sense to continue production.

By making this choice, the company is ignoring efforts by many groups and organizations, including Pace’s ICGL Council, to remove this hazard from the environment. Council member and sophomore Abby Sroka is frustrated by Starbuck’s decision. “The fact that they changed their minds sets a bad example for other companies and groups,” said Sroka. “It makes the situation worse because it looks like Starbucks decided the cause wasn’t worth their time and energy, which other companies will use as a way to cut their costs without backlash.”

Starbucks has avoided saying too much about the decision. However, Johnson has said that because the sippy cup lids were being made out of plastic, Starbucks believes that they were not actually making a major impact, and that it would be better to continue to produce plastic straws. This reasoning matches with some criticism that the company faced in July.

Associate Director of the Isdell Center for Global Leadership Zeena Lattouf was deeply affected by this news, but remained positive as head of the Pace ICGL Council. “The work these kids are doing to make a real change in the world shows their dedication and the willingness to fix mistakes of past generations,” said Lattouf. “Hopefully, Starbucks’ actions don’t prove too disastrous to the environment, but it will be just another problem for younger generations to fix.”