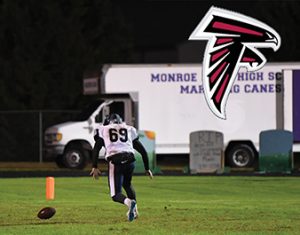 Class of 2019 football punter Patrick Markwalter caught the eye of the Atlanta Falcons after a superb year on the field for the Knights. Photo: Fred Assaf

Over recent years, Pace Academy has seen a slew of athletes thrive at the high school level and move up the ranks into college and a few even into professional sports. As the Academy tirelessly works to improve its athletic program, students grind both in-season and during the offseason to reach their full potential.

This year, however, one certain athlete has exceeded even the highest of expectations and skipped the collegiate level altogether. Senior Patrick Markwalter has received interest from the Atlanta Falcons for his punting abilities, and has been offered a spot at next year’s training camp, despite the fact that he has not even graduated from high school yet.

The Class of 2019 punter originally committed to Auburn University to continue his athletic and academic careers, but he realizes that NFL teams don’t come knocking very often. “It has been a dream of mine to play professional football since I was a little kid, so there’s no way that I could pass this up,” said Markwalter. “I would like to thank Auburn for extending an offer to me, but I simply cannot let this opportunity go to waste.” Markwalter also mentioned attending countless Falcons games over the years, in both the Georgia Dome and Mercedes-Benz Stadium.

One of the biggest hurdles for Markwalter to agree to a contract is the current rule regarding NFL players. According to NFL.com, “players must have been out of high school for at least three years.” However, when the Falcons’ Director of Scouting Steve Sabo was asked about this, he replied that “Markwalter already looks like he’s 25, so I don’t think that will be a problem.”

The Falcons look forward to working with Markwalter to help him become a better punter, as they hope to have found the replacement for nine-year veteran Matt Bosher once he calls it quits. “I’ve seen his highlights, and the kid’s got a leg, for sure,” said Bosher. “I can’t wait for training camp to come around so I can see what he’s made of.”

Falcons training camp begins July 23 for all rookies at the facility in Flowery Branch. Camp is open to the public as the Falcons prepare for the upcoming 2019-2020 season, so make sure to catch Markwalter out on the field as he battles for a spot on the final roster.