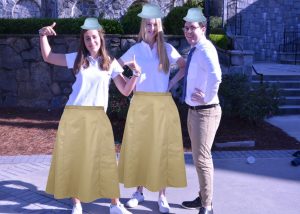 Beginning next year, students will come back to school and join a sea of blue, white and khaki.

“The administration has been kicking around the idea of daily uniforms for a while,” said Head of Upper School Michael Gannon, who was interviewed while wearing a prototype of the new uniform: a sensible pair of khaki pants, a white polo, and a crisp monogrammed robin’s egg-blue bucket hat. “We’ve finally decided to take the leap, and I couldn’t be more thrilled.”

“When it comes to fashion, you simply can’t beat the understated elegance of a khaki skirt,” agreed Upper School Dean of Students Allison Riley. “Imagine 480 students, all modestly swathed in our school’s colors. I get chills just thinking about it.”

The uniform is still undergoing small tweaks and adjustments, and Mr. Gannon has encouraged teachers to provide input. “I would say that of all the teachers, Ms. Smith has undoubtedly been the most involved in the process,” said Mr. Gannon. Upon seeing the first design of the uniforms, history teacher Helen Smith is said to have audibly gasped. “The skirts were above knee length,” she said, her eyes glinting. “Can you imagine? I couldn’t sleep at night imagining the possible dress code violations.”

Ms. Smith expressed her concerns, which resulted in the skirts being adjusted to mid-calf length. “Although I’ll certainly miss the adrenaline rush of catching people out of dress code, I can now rest easy knowing that no one will ever expose their knees in a Pace hallway again. You can’t put a price on peace of mind.”

However, not all teachers are as delighted as Ms. Smith. “I campaigned enthusiastically for a cape to be added [to the uniform],” said math teacher Jason Smith. “Nothing fancy, just something to add a little pizazz. Unfortunately, I was shut down by the rest of the teachers when I suggested it.” His eyes teared as he recalled his public humiliation. “I’ll continue to fight for the capes until my departure from Pace or my death – whichever comes first.”

The announcement of the new uniforms has provoked mixed reactions from the student body. “Are you kidding me? This is the best news I’ve heard in a while,” said junior Ben Caldwell. “Every morning I rise at the crack of dawn to put together a sophisticated yet youthful business casual outfit. Mandatory uniforms will free up two and a half hours of my day to dedicate to more noble pursuits, such as my studies.”

Other students, on the other hand, expressed rage. “I’m still in shock,” said sophomore Quinn Korach. “Ever since I heard, I’ve honestly found it difficult to get out of bed in the morning. The khaki shorts are seriously going to impair my movement.” Latin teacher and junior dean Grady Stevens echoed Korach’s sentiments. “I’m allergic to sheep, so the knee-length cable knit wool socks will be no picnic. However, I can’t deny that these uniforms are a reminder to students that they are here to learn. This is a school, not Mardi Gras, and they should dress accordingly.”

Along with the uniforms themselves, the administration is also banning jewelry, piercings, makeup and long hair. “Students will come to school without unnatural piercings and modifications, the way God intended,” said English teacher Don DuPree. In anticipation of the new rules, some people have proactively cut their hair. “Of course it was hard to say goodbye to my mane, but after seeing how good a tastefully done buzz cut looked on [senior] TJ [Rafeedie], I was ready to undergo my own transformation,” said senior Andrew Jenkins. “It’s freeing, actually.”

While the administration has been unyielding in its requirement that boys’ hair be above ear length, it has given students room to play around with different hair styles. “Should I get a buzz cut, a cropped bowl cut or just shave it all off?” questioned Caldwell, visibly delighted by the many options.

Of course, the boys aren’t the only ones who have found a silver lining in the new requirements. The girls are also becoming increasingly excited in anticipation of the rules for next school year. “I look forward to the complete lack of options,” said sophomore Casey Shoulberg. “Freedom is overrated and fashion is frivolous. In fact, I plan to start wearing the uniform over the summer to break it in.”

Love it or hate it, the uniforms are here to stay. “We’re never going back,” said Mr. Gannon, adjusting his white, freshly ironed cardigan. “This is a new age for Pace, and people can either hop on the train or get off the tracks.”