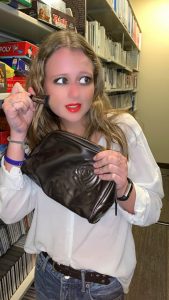 Freedom of expression comes in various forms. Hair color, jewelry and clothing style are just a few examples of characteristics people alter to show their personality. Makeup falls in the same category. The multibillion dollar cosmetics industry has taken over social media, with makeup artists getting millions of views and likes on makeup tutorial videos.

Although the new wave of art has inspired many artistic students to follow their passions, makeup has become a major problem for the Pace faculty. Due to excessive use and the major alteration of appearance, Pace is introducing a new dress code rule: makeup will no longer be allowed starting at the beginning of next year.

The initial complaints about the students’ overuse of makeup came from the upper school teachers. “One day, a student will come into my classroom with an insane amount of makeup on their face,” said upper school Spanish teacher Laura Agront-Hobbs. “The next day, they will come in with none. I won’t even recognize them and it’s impossible to identify them with such varying looks. How am I supposed to teach students when I don’t even know what they look like?”

Mr. Assaf was appalled by these results. “This is a major issue,” he said. “I myself never noticed because I have studied every student’s face meticulously with and without makeup. However, I do not expect this type of examination from each teacher. The issue is caused by the students themselves. Makeup is affecting the quality of teaching Pace has to offer.”

Despite the teachers’ excitement, students are far from accepting this decision. Due to the strict dress code and ban on dyed hair, students feel that they are already repressed enough creatively. “I already threw away my checkered pants and corduroy overalls for this dang school,” said junior Morgan Payne. “I’m considering going to Lovett. I’m beyond upset. If I can’t wear my makeup, no one will truly understand who I am.”

Makeup is not only utilized to express one’s personality, but it is also used to raise self esteem and cover perceived flaws. Some students are nervous they won’t be accepted makeup-free. “I don’t actually know what it feels like to have to wear makeup,” said senior Conor Hartman. “I’ve heard people talking about how nervous they would be to come to school without it, and I totally get where they were coming from, although I can’t relate. Luckily I won’t have to be here next year to witness the drama.”

Despite evidence that students would feel uncomfortable going without makeup, Pace faculty sees the ban in a different light. “People need to feel more comfortable in their own skin,” said Mr. Assaf. “I think this new rule will force people to be more accepting of one another and everyone will soon be on an equal playing field when it comes to appearance. This new rule is being put in place. No one can convince me otherwise.”