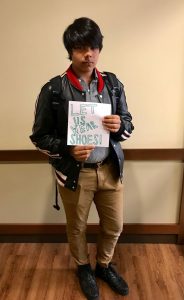 Quintana has started a riot, making signs and handing them out around Pace. Photo: Jill Rawls

Today, you might get a demerit, lecture and an angry glare if history teacher Helen Smith catches you eating in the Upper School, but starting in the 2019-2020 school year, you’re guaranteed to receive two citations if you’re caught wearing shoes on any part of the Pace campus. This shoe ban, titled the “Gan-Ban” by angry students, was implemented by Head of Upper School Michael Gannon following his realization that shoes detract from the learning experience. After reviewing a study published by BareFootBabies.com, Mr. Gannon believes students will be more creative because they will be a few inches closer to nature.

“Our Turkish marble stairs were built for bare feet, not covered feet,” said Mr. Gannon. “Shoes track in too much dirt anyway. Our school will be a lot more sanitary without its exposure to our students.” Mr. Gannon will require that students arrive on campus shoeless; wearing shoes even in the parking lot is strictly outlawed.

Many Pace parents, however, do not see any sanity in Mr. Gannon’s vision. “This rule encourages upperclassmen to drive to school barefoot, which is incredibly dangerous,” said Shea Fleming, local Atlanta pediatrician and mother of senior Paige Fleming. “What are the kids supposed to do when the weather is below freezing? They will be much more susceptible to hypothermia. I know I’ll be treating oodles of broken toes since shoes are also prohibited for sports practices.”

Mr. Gannon is currently facing wrath from all angles: Pace parents are upset, Pace faculty members are confused, but most of all, fashion-forward students like junior Matthew Quintana are absolutely livid. “I’m dumbfounded that Mr. Gannon could take away the thing that allows students to express themselves most,” said Quintana, who prizes his Louboutin and Gucci sneakers, among his many other pairs of shoes. “It’s no surprise that I love shoes. Having to go barefoot is demeaning and insulting.”

The senior class feels lucky to have escaped the Gan-Ban. “I don’t know what I would do if I couldn’t rock my Vans anymore,” said senior Jack Ferguson, who has been notorious for his fashionable shoes since the eighth grade. His impressive Vans collection has recently reached 27 pairs.

Mr. Gannon explicitly stated that faculty members caught in shoes will risk losing their job. “Oh, and no socks are allowed either,” said Mr. Gannon. “Soon, I hope our official title will be ‘Pace: The Barefoot Academy.’”