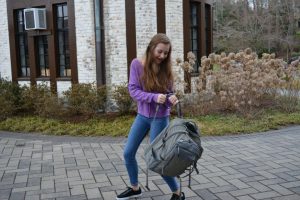 Sophomore Mary Paige Pope staggers home after a long day of school. Each step hurts worse than the first. She shifts her backpack from side to side, trying to relieve the crush of its 28 pounds. The absurd weight of backpacks has created a health epidemic for students nationwide and Pope is just one of the millions of students affected.

After a groundbreaking report on this crisis, Pace Academy has decided to be one of the first schools to take action. Faculty and staff have voted to ban all backpacks from Pace Academy’s Lower, Middle and Upper Schools.

It’s no secret that backpacks are a key cause of back problems. Researchers have crafted countless reports and articles on the topic, but many believe the problem is a myth. A report by award-winning journalist William Meade recently made headlines. It consisted of a pool of data from the past few years, following the seemingly innocuous rise in conditions like chronic lower and upper back pain, rounding of the shoulders and spinal alignment problems. The catch is that all cases primarily occurred in students. His research and scientific study shows that as of 2019, 86 percent of high schoolers are predicted to have some sort of permanent underlying back problem that will develop later in life.

After reading and hearing about this article, a wave of fear rippled through Pace parents and children. Parents flooded Head of School Fred Assaf’s inbox with apoplectic emails. Hours later, a mob of angry parents surrounded Mr. Assaf’s office, holding posters and demanding a change in the backpack policy. “I thought what they were saying about backpacks causing back problems were just rumors,” said one parent in the crowd. “I cannot have my child suffer because of something as easily fixable as not using a backpack.” Two days later, the backpack ban was passed and will be put in to effect on April 1.

After the ban is enacted, Pace plans to take one of two courses of action. The expensive option is to replace all backpacks by equipping students with rolling backpacks, though this would prove problematic for walking up stairs. The more controversial option is the use of lockers. The lockers are met with hostility at Pace, shunned for being in too inconvenient of a location for students to access between classes. “Using lockers exclusively to hold books all day is troublesome,” said junior Virginia Heiser. “I would be in such a rush between classes. I would rather risk a back problem than be late to all my classes.”

The school nurses have been one of the schools biggest supporters of the ban. “We’ve always thought we knew the consequences of heavy backpacks weighing down on students shoulders every day, but we never knew the problems could cause permanent damage,” said nurse Mary Ann Bello. “We need to take action before it’s too late.”

Head of Upper School Michael Gannon also backed the ban. His approval of the ban comes from not only its health benefits but for its organizational benefits as well. “The hallways and FAC are always cluttered with backpacks,” he said. “I’m hoping Pace Academy’s ban on backpacks will keep the hallways tidier.”

Some students have expressed their distaste for the ban in more rebellious ways. An estimated 53 students held a protest during school hours only days after hearing the news of the backpack ban. “My backpack is important to me,” said sophomore protester Abby Sroka. “It’s been with me my entire life. I don’t want to lose it for petty reasons.” For many students this outrage is understandable. Most students have been using backpacks for as long as they can remember, and can’t imagine using rolling backpacks or running back and forth to lockers between classes.

No matter how much the students protest, it seems Pace Academy will not budge on their decision. “Our top priority is student safety,” said Mr. Gannon. “Students don’t seem to realize they jeopardize their health every day simply by wearing a backpack.”