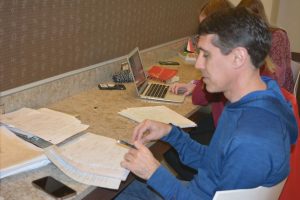 On March 28, math teacher Jason Smith received a jumbo check worth $1,000,000 in the Pace gardens, confusing many people in the Pace community. “I was very surprised to see a group of people with photographers in tow come in the front door to my desk,” said student affairs administrator Bowen Eagleson. Mr. Smith, being the humble man that he is, failed to tell anyone that his theory regarding a new infinity was proven correct.

Since the late 19th century when Gregor Canton proved that there are two types of infinity, countable and uncountable infinity, people around the world have been searching for a new kind of infinity, and many organizations have offered huge cash prizes for the person who finds it.

With the two types of infinity, countable is a number set (1,2,3…) all the way to infinity, and the other is uncountable, like the numbers between zero and one. In some ways the latter is bigger but in some ways they are the same size, a very confusing concept in mathematics that many do not even realize exists.

“It was when I was grading what seemed like an endless stack of papers that the idea came to me,” said Mr. Smith. He named the new infinity “work infinity,” and he defined it as “when there is so much work to do that it could never be completed.” “I went through two full packs of Expo markers testing and proving my hypothesis,” said Mr. Smith.

The moment was very special, not only for Mr. Smith, but for the whole Pace community, as it is most likely the biggest accomplishment by any teacher or student from Pace. “We couldn’t be prouder of him,” said Head of School Fred Assaf.

When asked what he would do with the cash prize, he responded: “I’m probably going to buy a lifetime supply of Expo markers and Cliff bars, and the rest will probably go into savings.” He has recently been offered jobs by many prestigious universities around the country.

However, to the excitement of many Pace students, Mr. Smith announced that he is staying, because teaching high school students is his passion. Mr. Smith is happily finishing out the school year and looks forward to the summer and spending some of his cash prize at his local Office Depot.