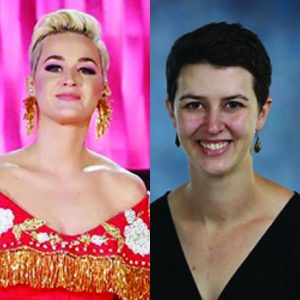 Celebrities have made headlines by going undercover. Recently, Miley Cyrus disguised herself on “Jimmy Kimmel Live!” and proceeded to interview strangers about their thoughts of her. But she’s not the only celebrity who has done this, as Cyrus’ moves have inspired other stars to get truthful feedback on their personas. Who else has been a celebrity spy?

Katy Perry is one celebrity who has taken this prank too far. Currently, she is charged with nine counts of fraud. Her devious plan was finally brought to light after a two-year investigation by the Atlanta Police Department (APD), tipped off by an anonymous source at Pace Academy.

When taken into the station on March 15 for initial questioning, Perry’s alter ego, Pace Academy upper school history teacher Caitlin Terry, was discovered. Although the name was not very creative, she had been able to stay undercover since 2015, after buying a fake teacher’s certification and degree from the University of Virginia.

Perry’s arrest was very unusual, as it took place in front of high school students at the Academy. During assembly on March 27, after Head of Upper School Michael Gannon asked for teacher announcements, history teacher Caitlin Terry stood up in front of the student body to deliver an announcement. “I have something to tell everyone,” said Ms. Terry, who was visibly nervous. “I am singer-songwriter Katy Perry.”

A gasp arose from the audience. At first students were confused and not convinced. It was not until she broke out in song and dance while standing on the stairs that the APD stormed into the Fine Arts Center to arrest her.

This is one of the most interesting cases of fraud since Katy Perry became a highly regarded and popular teacher at Pace Academy. “Everything is not what it seems,” said former Pace student Selena Gomez, who was also previously undercover. The Pace Board of Trustees continues to look into this situation. Meanwhile, a live interview with Katy Perry and Gayle King will air on CBS This Morning on April 1.