Have You Been Eating Your Bagels All Wrong? 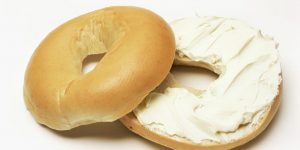 There is lots of controversy surrounding the proper style of bagel eating. Photo: Companions Eat

For as long as I can remember, the Pace snack bar has been offering bagels to hungry students. I have seen students from across the Upper School, from freshmen to seniors, enjoy the different assortments of bagels and cream cheeses offered at the snack bar. However, what I have concluded from a copious amount of research, is that not everyone eats their bagels the same way. My intuition has driven me to ask the important questions and get to the bottom of this pressing issue: is there a correct way to eat a bagel?

While there are several different toppings that can complement a bagel, such as salmon, bacon or egg, none of these options are available at the Pace snack bar. So, for simplicity’s sake, these bagel combinations will only include cream cheese.

For starters, ridiculous forms of bagel consumption can be easily dismissed, such as spreading cream cheese over the top of a bagel, without opening it at all. This method is clearly for bagels that have not been cut, or for those possibly in a rush. Nonetheless, this approach is backward and just looks plain wrong. “I have no sympathy for people who eat their bagels with cream cheese on top,” said junior Evan Duncan. “It is an egregious outrage.”

Another clear form of barbarism would consist of tearing apart one’s bagel and dipping it in their cream cheese. This method is obviously for rookies that are uneducated in the delicacies of bagel dining.

This brings us to one of the more popular forms of bagel eating, which is to separate the top and bottom, spread the cream cheese evenly across the pieces, and eat the two pieces separately. When asked to comment about their preferred technique for eating a bagel, several students indicated that eating it as two different pieces is the primary way people eat their bagels. “I always eat my bagels that way,” said freshman Sam Howe. “In my eyes, I don’t see any other way of eating it.”

Nonetheless, I do not see this method as complete in all facets. With this approach, there are a few flaws, as bagels with seasonings on top such as sesame or everything bagels are left vulnerable to their seasoning falling off while flipped over, or cream cheese can spill over onto the lips. This brings us to the correct option for bagel eating.

Opening the bagel, spreading the cream cheese, and returning the pieces to their original and complete form is the proper form of bagel consumption. When a bagel is created, it is made as one whole piece, not two separate ones, so it would therefore only make sense to bring the two pieces back together after supplying the inside with cream cheese.

This also eliminates the issue of seasoning falling off the top piece, which is crucial to proper bagel enjoyment. And while the shape of a bagel may resemble that of a doughnut, the material with which a bagel is made more closely resembles bread. So, with this method, a bagel with cream cheese would most relate to a sandwich, and one does not eat a sandwich as two separate pieces of bread.

Alas, while my conclusion that a bagel should be eaten as one whole still stands, there is still a large amount of support among students for other methods.