In Westminster’s Time of Need, Pace Steps Up 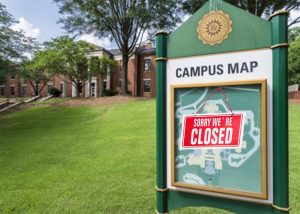 After a health scare, the Westminster campus is now empty. Photo: Francesca Vaneri

The Westminster Schools and Pace Academy are separated by 1.52 miles, a stretch of West Paces Ferry Road and a decades-long rivalry. However, the Wildcats and the Knights will soon have to put their animosity aside and join under one roof.

Radon, a radioactive gas, has been detected on the Westminster high school campus, resulting in a temporary shut down. “There’s a reason they call it the silent killer,” said Westminster Head of Upper School Cindy Trask, still visibly in shock in the wake of this nearly fatal scandal. “Things were looking pretty bad, and having students in the hospital with radon poisoning certainly didn’t help,” she said.

But in their darkest hour, Ms. Trask got a text from Pace Head of School Fred Assaf. According to Ms. Trask, it went something like this: “We’re sorry about your deadly chemical leak/But if it is a new place you seek/ Look no further than down the road/To find in Pace your new abode.” “I was a little confused at first, but then he sent me a follow-up email which cleared things right up,” she said.

That’s right: Pace has stepped up and offered to take in the newly displaced Westminster student body. “This is a wonderful opportunity to display some of our famous Southern hospitality,” said Mr. Assaf. “I personally look forward to our guests arriving, and I’m planning to give a big welcoming speech. I’m having a lot of trouble coming up with my usual opening joke since I can’t use any of my Westminster material, but luckily I have a couple of Lovett jokes up my sleeve.”

Unsurprisingly, the decision has proved controversial among the student body and faculty members. In fact, some students have formed an underground resistance group. “I can’t reveal too much, but we won’t go down without a fight,” said one student, who requested to remain anonymous. “You’re either with us, or you’re against us. I’ve said too much.”

Like it or not, the Westminster students will join the Pace Upper School on April 14. In anticipation of their arrival, the Pace color will be changed to yellow. The Westminster upper school head decided on the color because she mistakenly believed that’s the color you get when you mix together green and blue.

“Although clearly incorrect, the color represents so many positive messages,” said Head of Upper School Michael Gannon. “It’s a symbol of goodwill; an olive branch, if you will, to our visitors. We’re delighted for them to arrive, and we hope every student will soon see the benefits of this merging.”