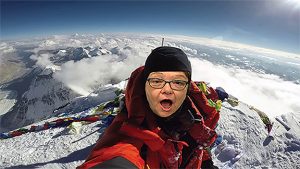 Ever since she was a little girl, upper school history teacher Helen Smith has lived largely and courageously. She has battled her fears, jumped off the diving board, tested Republicans in debate, suppressed student rebellion and traveled across the world to uncover mysterious historical truths. As she sat beside her fireplace with her cats to draft her 2019 resolutions, Ms. Smith realized her greatest aspiration in life had not yet been fulfilled: to reach the 29,029-foot high summit of the tallest mountain in the world, Everest.

After the four-day conference, Dr. DuPree escorted the students to the Tenzing-Hillary Airport in Chaurikharka, Nepal for travel back to Atlanta. As one student puts it, Ms. Smith had entirely different plans. “At our last breakfast in Nepal, Ms. Smith told us she was leaving the group and going on to tackle Everest,” said sophomore and delegate member Peyton Smith. “We were shocked. Of course people were laughing, but I remember one student, [sophomore Noah] Levenson, got really scared for Ms. Smith and started crying. We begged her not to go.” Evidently, she did not listen.

After her energy-packed breakfast of momo, traditional Nepalese dumplings, Ms. Smith called a taxi, said goodbye to the kids, and drove the 138-kilometer distance from Kathmandu to Lukla, a small town near Everest’s base. “It was a bittersweet departure,” said Levenson. Before her trip, Ms. Smith was training daily for this pursuit and met twice a week with her doctors. Students could tell she was beefing up before spring break and building a champion mindset before such an arduous and physically-demanding journey. “I remember one day in February that I high-fived Ms. Smith, but it kind of hurt,” said senior AP Comparative Politics student Chase Karamanolis. “She was really strong.”

Mentally and physically prepared, all Ms. Smith needed was to build her bag and become acquainted with her local sherpa (skilled Tibetan/Nepalese mountaineer), Pasang Dawa Lama. “Pasang was a true Renaissance Man,” said Ms. Smith. “He was strong and mighty, yet sweet and knowledgeable. We bonded over our hatred for Napoleon.” In addition to Lama, Ms. Smith climbed with two chefs, a working crew of locals and five other courageous women from Brazil.

The National Public Radio reports that typical Everest climbers carry massive bags that weigh upwards of 120 pounds, but sherpas and locals can help lessen this burden in the beginning stages of Everest. “Helen sure does know how to make everybody laugh, but I was not laughing when I had to carry her copy of the ‘Communist Manifesto’ to the peak,” said her sherpa Lama. “All jokes aside, she was a pleasure.”

In an interview, Ms. Smith reflected upon one of her most memorable experiences from the trip. She told the story of her pangs of suffocation near Camp 1 at the Valley of Silence. Located roughly 6,400 km high, the Valley of Silence is a vast, flat area of deep snow that hides underlying, dangerous crevices. This relatively easy part of the ascent can become incredibly treacherous if one’s lungs are not properly acclimated to the decreased air pressure.

Over the whole journey, mountaineers make sure they move slowly so as to not stress their adjusting lungs. “I guess I moved too quickly up the mountain when my lungs were not ready,” said Ms. Smith. “When I reached the Valley [of Silence], my body shut down… I collapsed, everything turned black, my vision was impaired, and it was very difficult to breathe. The group surrounded me, the medics rushed to my attention, a mask was put on my face… You’d think I was the first person to come down with the [bubonic] plague. I was in serious pain.”

The next hour or so of her memory has since faded, but she remembers the moral of this story. “I swear I was about to let go, but I suddenly recalled the wise words of [Italian Humanist] Leon Baptiste Alberti: ‘A man can do all things if he but wills them.’ And let me tell you, I was going to reach the top,” asserted Ms. Smith. She calmed down, took a day of rest and acclimation, and continued on her journey.

Ms. Smith described her emotions when she finally reached Everest’s peak after years of childish fantasy and two weeks of dedicated blood, sweat and tears. After waking up in complete darkness to begin her final day of hazardous climbing and continuously replacing her oxygen masks, Ms. Smith ascended to the peak at roughly 8:45 a.m. NPT (Nepal Time). Exhausted and amazed, Ms. Smith immediately started crying after finally doing the impossible.

“I wasn’t crying because the view was beautiful, but rather, because I could not see it,” said Ms. Smith. “At one point on the Knife’s Ridge [the final obstacle before reaching the summit], my glasses were blown away by a gust of frigid air, gone with the wind. I had finally conquered the summit, yet everything below me was a blurry haze of white desolation. The idea that something so miraculous stood before me, yet my own eyes failed me was enough to make me weep… But I guess I can look up pictures of Everest’s peak on the interweb.”

Incredibly, Ms. Smith was later reacquainted with her glasses on her descent. While complaining about the copious piles of trash that coated the once pristine snows of Everest’s Camp 2, Ms. Smith looked closely beyond a leftover can of baked beans to find the iconic teal spectacles that the Pace community knows and loves. After a few hours of near total blindness and a few stumbles, Ms. Smith could finally see (somewhat) again. “And that, my dear, is far more satisfactory than the feelings of freedom I gain after whipping an ignorant student,” joked Ms. Smith.

Ms. Smith left Nepal and flew 13,089 kilometers back to Atlanta after enduring two weeks of extreme mountaineering and attaining her dreams. She was unfortunately seated next to a man who liked chewing gum on the 32-hour plane ride home, which inevitably resulted in physical conflict and Ms. Smith’s forced ejection from the airline. But, that’s a whole different news story…