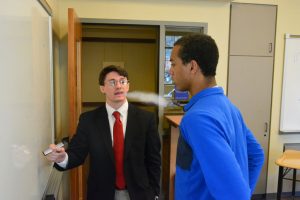 Mr. Stevens’ habit dates back to 2015 when this photo was taken of him with Dustin Hadley ’15 by former Knightly News staffer Jack Zook ’16. Photo: Jack Zook

Dark events took place on the afternoon of March 27 in our own Pace Academy halls. Class of 2020 Dean Grady Stevens was spotted hitting the Juul, an electronic cigarette, on school grounds. An unsuspecting student passing by Mr. Stevens’ office believed the metal device to be a portable charger and essentially walked into his office to borrow the “charger” only to uncover the truth.

“I was so confused when he started to put the portable charger in his mouth,” said freshman Meghna Singha. “I immediately walked away when I realized that Mr. Stevens was not using a charger, but a Juul instead.”

Singha did not know what to do with the information she discovered. She ultimately decided to meet with Head of School Fred Assaf and Head of Upper School Michael Gannon to discuss the situation. Mr. Assaf and Mr. Gannon could not believe the news they had just heard. They decided they would need proof of Mr. Stevens’ actions, as “Juuling” on school grounds is prohibited.

Mr. Assaf and Mr. Gannon had the security staff plant hidden cameras in Mr. Stevens’ office that night, inside picture frames and light fixtures. What they discovered the next day shocked the faculty and forced Mr. Gannon to tears. “All he does by Juuling is fund rich, old, white people and their lavish beach houses,” said Mr. Gannon. “I can’t believe he would disobey the Pace handbook like that, especially as a faculty member.”

Mr. Stevens was brought to meet with the Honor Council after school hours on March 28. The council reminded him of the dangers of electronic cigarettes and the poor example he is setting for high school students. The message, however, did not seem to click for Mr. Stevens. “There’s nothing wrong with a quick buzz before class,” he said. “Sometimes my students and I just take a few rips together so we all can focus on the day’s lesson.”

The meeting ended with the following verdict: Mr. Stevens’ Juul would be confiscated and he would not be asked to teach at Pace next year. Since Mr. Stevens’ behavior will not be tolerated at Pace any longer, he has decided to move onto greater things, selling Juuls to teens around Atlanta that cannot purchase them themselves. “As a teacher, my main priority is to help the children,” said Mr. Stevens. “Since Pace won’t let me do that, I’ve decided to be the bigger person and take my activities elsewhere.”

As far as the confiscated Juul goes, its location remains a mystery. Some suspect it was flushed down a school toilet, others think that it was thrown away. But some students, with confirmation from Assistant to Head of Upper School Nikki McCrary, claim that they’ve seen trails of vapor coming from Mr. Gannon’s office.