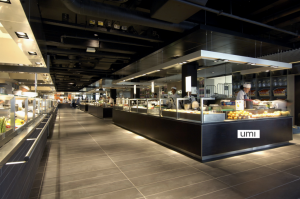 In response to Pace’s potential construction of a new natatorium, lower school, sports fields and parking lot, the student body has campaigned to use the money on something that would really benefit them: a revamping of Pace’s “rather dull” and “disgusting” Snack Bar in the Inman Center.

Students have complained about the Snack Bar’s services for years. According to a number of students, the pizza’s too cold, there aren’t enough chip flavors, the candies are too basic, the chicken tenders are too bland, etc. In the eyes of a typical Pace student, the Snack Bar has simply neglected its founding principles of excellence and has become an overrun and tired shack of unimpressive foods, not to mention the fact that “it’s run by a lazy group of gossiping Snack Bar moms,” as sophomore Ashley Myers puts it. The students demand that their interests be prioritized. The students demand that their snacks be of luxurious standard. The students demand a change.

While previous discussions with Head of School Fred Assaf have ended time and time again with swift rejection, the students are using the school’s current fundraising efforts as a means to support their cause. “If they’re already raising money for pointless stuff, they might as well build me a sushi bar,” said junior Maya Kaplan. Eventually, other students realized that Kaplan’s joking words bore a logical truth: the time is now.

The administration’s agreement to the total destruction of the current Snack Bar and its replacement by a glorious mini food-market would never have happened without sophomore Emily Butler’s passion and courage. On March 9, Butler hosted a small student meeting at her family’s home in Buckhead to start the planning process.

“If this was going to happen, I needed the strongest group of powerful student leaders, as well as the presence of teacher favorites [sophomore] Tommy Assaf, [senior] Sam Assaf and [junior] India Behl.” The meeting lasted roughly four hours, and although the students left the Butler home looking exhausted and defeated, the drive to destroy the Snack Bar had never been more fervent. They were determined.

The group drafted a “Declaration of Fine Foods” and presented it to Mr. Assaf. In the document, the students outlined their argument and begged the school’s Board of Trustees to spend some of the money raised in the capital campaign on tearing down the Snack Bar and replacing it with a mini market of nicer foods.

“With the best writer in the Upper School [freshman] Buck Hall as primary writer, I was certain the declaration would be successful,” said Butler. The students cultivated the art of ethos, pathos and logos so perfectly that the board accepted their request in mid-March. The new Inman Mini Market blueprints were released to the public on March 26, and students are thrilled.

To replace the grungy old Snack Bar and the disgusting gray Inman tables, three beautiful checkout counters will be erected by architect Eric Langford of EL Designs. Masterfully hidden behind each checkout counter will be three separate kitchens, where the prospective chefs of each establishment will work.

The three vendors coming to cater at Pace’s Mini Market are Chick-fil-A, the Japanese restaurant Umi and Bone’s Chophouse. Students will be able to pay for their food using the same photo-ID technology as before, but will now have the option to spend the money on some of Atlanta’s tastiest cuisine. Construction will begin the first day of summer, and the Mini Market’s official opening will be August 1.