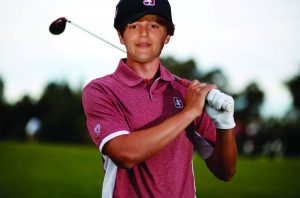 George Robbins, the standout golfer from Pace Academy, will be entering his senior season next spring. However, he has just made a verbal commitment to play college golf for the Stanford Cardinal. “They impressed him when he went to Stanford last week for his sixth recruiting camp and he got to speak with Conrad Ray, the head coach,” said his brother William Robbins, himself a former high school standout who now plays for Auburn.

Robbins is considered to be one of the top prospects in the country for the Class of 2020 and claims to have shot five under par for 90 percent of his tournaments last season. He has made a name for himself in particular for his multiple hole-in-one shots on mini golf courses throughout the country; most recently with a shot that ricocheted off of a windmill hitting Robbins square in the forehead before it went into the hole.

“I have never seen anything like it before,” said teammate Jimbo Smith who is committed to Oregon. “He never told me if he meant to hit it off of the windmill and then hit his head, but it was one of the best shots I have ever seen.”

Robbins list of finalists also included Vanderbilt University and Duke University before eventually committing to Stanford. According to Robbins, access to beaches was among the top reasons why he committed to Stanford. Verbal commitments are non-binding as he is still waiting for his letter of intent, which was supposed to arrive in February.

“They claim the letter is stuck in the mail but I’m sure it’s on it’s way,” said Robbins confidently.  Robbins seems unconcerned about the delay, yet another example of his confident personality which earned him the top recruiting spot at the “Ivy of the West.”