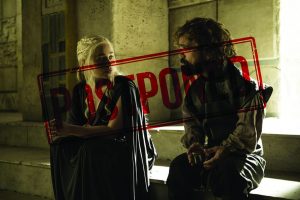 (L-R) ‘Game of Thrones’ actors Emilia Clarke and Peter Dinklage are in search of new jobs after the postponement of Season 8. Photo: Flickr

Not only is “Game of Thrones” known for its ability to create a set that drags the viewer into the world of George R.R. Martin, the creator of “Game of Thrones,” but also its ability to leave the audience with a cliffhanger after every episode. Season 7 left the audience with arguably the most dramatic cliffhanger of the entire series… but it seems that fans are going to have to wait a little longer to resolve this cliffhanger.

On March 28, 2019, George R.R. Martin made an announcement that shocked the entire fanbase: “After disputes with Kit Harrington (Jon Snow) over his salary, we have decided that the new season will have to be postponed until further notice.” Kit Harrington has been with the cast of “Game of Thrones” since the first season. “We negotiated his contract at the end of Season 7 and it was all settled, but I guess he just wanted more money,” said Martin.

Co-star Emilia Clarke (Daenerys  Targaryan) was recently asked about this dispute during an interview with Rolling Stone Magazine. “I was surprised when George told me about this entire situation,” she said. “Kit has never been concerned with money. I am just worried about how the fans will react to this.”

Many loyal fans of the show are already outraged given the announcement. “I have been waiting for this season for four years, since I started in Season 5,” said junior Jay Statisky. “If Kit Harington doesn’t get his **** together, then I can personally guarantee that his career is over.”

The New York Times recently announced that the new season is expected to premier in the summer of 2020 if the producers can come to an agreement with Harrington. Until then, fans can only wait and hope that the new season will come back as soon as possible.