Evan Duncan to Audition for ‘The Voice’ 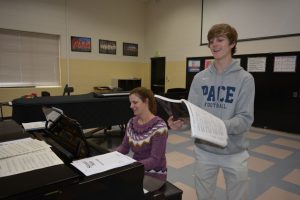 Junior Evan Duncan will be traveling west to the Bay Area soon to pursue his lifelong dream of auditioning for NBC’s hit show “The Voice.” Duncan has had many ups and downs in his musical career and is hoping that this opportunity will boost his career in the music industry.  “I am most excited just to meet successful artists like Adam Levine and John Legend,” he said. “Even if I don’t get past the first round, this will for sure be an eye-opening opportunity.”

Duncan first performed in front of a large audience when he was in sixth grade, showcasing his talent at Musical Wednesdays in the cafeteria. In middle school, students had the chance to display their hidden skills during lunch, and Evan was eager to do so. In front of about 100 people, he bravely sang “Goodbye Yellow Brick Road” by Elton John. Unfortunately, he was met with some laughter throughout his performance, which brought him to tears during his act.

This bump in the road diminished his confidence for a couple of months as he refused to sing again, whether it be in the car, with friends or even in his room alone. “I was so embarrassed with myself for how bad I was, I guess,” said Duncan. “I didn’t even want to show my face to anybody anymore, but my friends encouraged me to let it go and keep singing.”

In 10th grade, Evan lost a bet with his friends in Fantasy Football and was forced to sing “Night Changes” by One Direction at the annual upper school Cabaret. Duncan, worried about this performance based on his middle school one, stepped up and agreed to do so. “It’s only fair that I sing because technically, I did lose the league,” said Duncan. “I practiced each night for two weeks before Cabaret and was ready to go.” The days leading up to Cabaret he repeatedly sang in front of his mirror at home to get in the right mindset.

At Cabaret, Evan took the spotlight in Knights Hall with the room at full capacity. His friends sat front row to cheer him on and he seemed ecstatic to be back on stage. Throughout his performance, he got the crowd engaged, clapping and waving their hands to the tune of the song.

His parents, knowing musical talent was in his blood, encouraged him to audition for “The Voice” because they believed he had the potential to succeed. “My parents and sisters are my biggest supporters and fans,” said Duncan. “I know they will always stay by my side throughout my music career.”

He has been asking his peers for suggestions of what song to sing at “The Voice” auditions and has come to a decision: “Night Changes.” He wants to sing the same song that reignited his love for music and performance. Evan has been working with Pace chorus teacher Susan Wallace on his tempo and vocals. She has also advised him of what food and drink to consume in preparation for the audition.

Evan has been a fan of “The Voice” since 2013 when Danielle Bradbery at just 16 years old as a part of country artist Blake Shelton’s team. ”She was amazing and so young, so it inspired me,” said Duncan. “That’s when I started watching ‘The Voice’ weekly, and in my room I would act like I was on the show.”

When he goes to San Francisco he plans to meet up with other contestants for a meal and a get-to-know-each-other session. Although the group may not see each other again, a big part of “The Voice” is the relationships formed. Everyone auditioning is in the same boat as Evan, so forging new friendships with other singers can open the door for more opportunities.