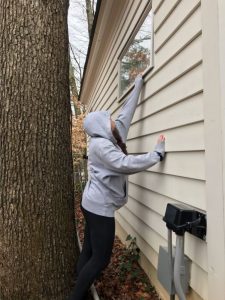 Senior Eden Kerker has been fuming for a while now. Since sixth grade, she has had one dream: to become the sole editor in chief of The Knightly News. For all of first semester, she kept quiet and pretended to bask in her role as lifestyle editor, writing about her favorite Netflix shows, giving important tips for freshmen and comparing Apple to Samsung. But over winter break while her peers relaxed, Kerker schemed.

She went for the easy target first: unsuspecting co-editor in chief and senior Charlie Hirsch. “I knew removing Charlie from the picture was the first step to establishing my dictatorship,” said Kerker. “I’ve read my history books, and I know how a good coup d’etat works. Please keep this off the record, but I may have broken a few laws along the way.”

On the night of Jan. 6, the day before school started again, Kerker dressed in her black leggings, hoodie and combat boots and rode through the streets on her black motor scooter. Kerker knew Hirsch liked to sleep with his window cracked open to feel the gentle breeze on his face. “I climbed a nearby tree and leapt to his windowsill,” she said. “I then wedged the window open and crept in.” She pulled out her black pocket knife.

The next morning, Hirsch was not present in first period newspaper, and therefore was unable to lead the class discussion he was responsible for. He failed to turn in his story on time. The staff was in shambles without him. “I was a little worried about him,” said Knightly News Faculty Advisor Lee Wilson. “He didn’t inform me that he would be missing class.”

Hirsch woke around noon, and with a sleepy yawn, he reached for his alarm clock. “I didn’t hurt him,” clarified Kerker. “I just cut the wires of his alarm clock. Oh, and I did the same thing to Joe’s. Couldn’t let his twin brother disrupt my mission.”

The Hirsch brothers leapt from their sheets and raced to school. “By that point, there was nothing I could do,” said Hirsch. “I had let Ms. Wilson down, and there was no way I could regain her trust.” Hirsch resigned from his position the next day.

After the fall of Hirsch, senior Genna Schwarz vowed to carry on Hirsch’s legacy and began working harder than ever as the sole editor in chief. However, Kerker had other plans.

Kerker knew Schwarz would arrive late to school even with her alarm clock in working order. “I had to come up with something more creative to take Genna down,” said Kerker. “Once I made my game plan, targeting her weakness was easy.”

Kerker has always known that Schwarz prioritizes finishing assignments at least a week in advance. To trigger a meltdown, Kerker hacked into Schwarz’s Google Classroom account and switched every assignment deadline to one week earlier. Schwarz, ashamed that she allowed herself to procrastinate, began to question how much she deserved to be responsible for the newspaper.

“To say the least, I was disappointed in myself,” said Schwarz. “I knew I had to focus on staying ahead of my work. I apologized to Ms. Wilson and stepped down.”

After her stealthy attack, Kerker knew her battle was far from over. “Just because Genna and Charlie were gone, I still didn’t have the title I wanted,” said Kerker. Ms. Wilson announced that the staff would be voting for who would become the next editor in chief.

Kerker turned to the sophomores for support. “I hate to say it, but I bribed them,” said Kerker. “I may have blackmailed them a little, too. But don’t tell anyone,” Kerker begged. “I need to look like I gained power naturally.”

To appeal to Ms. Wilson, Kerker began bringing her coffee daily and stopping by to occasionally walk her dogs. Together, Eden and the sophomores garnered the support they needed to put Eden atop the throne. Ms. Wilson approved the decision.

Kerker has begun her authoritarian rule and draws pleasure from making the other staff members fear her wrath. If anyone mocks her story ideas, he or she is banished to the corner for the rest of the class.