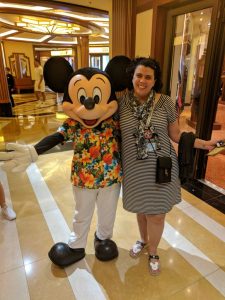 Upper school Spanish teacher Paula Pontes is known for her love of Disney. Upon entering her classroom, one can see Disney merchandise scattered everywhere and on Fridays she even has her students sing Disney songs. Dra. Pontes has been to Disney World and Disneyland a combined 74 times, but she is not yet ready to stop. She recently announced a leave of absence for the coming school year in order to travel the world to visit all the Disney parks.

“She has been talking about this trip for some time now, but we never thought she would actually leave,” said sophomore Pearson Bates. “I’m just glad she’ll be back for my senior year so I can have her again.”

“I have been thinking about this for a long time and right now seems like the perfect time,” said Dra. Pontes. With nothing holding her back, she plans to leave at the end of July and head off to Europe. There are Disney resorts located in California, Florida, Hong Kong, Paris, Tokyo and Shanghai and a total of 12 parks worldwide, with Dra. Pontes planning to begin her adventure in Paris.

Disneyland Paris opened in 1992 and since then, according to disney.com, it has become Europe’s number one tourist destination. Dra. Pontes plans to spend a month examining the legitimacy to this claim while staying at one of its six themed hotels and visiting both of its theme parks.

She then plans to head to Asia where she will visit Hong Kong Disneyland, Shanghai Disney Resort and Tokyo Disneyland. “I have never been to Asia before and it makes it even more special that I am going to see the Disney parks,” said Dra. Pontes.

To end what she calls her “Magical Disney Explosion Tour,” Dra. Pontes will revisit the two parks in California and the four parks in Orlando that include the Magic Kingdom, Epcot, Disney’s Hollywood Studios and Disney’s Animal Kingdom. Dra. Pontes is very excited to take this trip of a lifetime. “I could not be more excited. I will miss my students very much, but when I come back I will have so many pictures, memories and souvenirs that I will be able to share with everyone for years to come.”

Many students are very excited for Dra. Pontes but sorry to see her leave. “I am so sad she won’t be here for my senior year,” said junior Julia Konradt. “I can’t believe the school is letting her do this.”