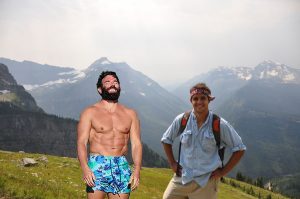 (L-R) Dan Bilzerian and Mr. Whyte pause for a photo on their hike at Glacier National Park. Photo: Abby Meyerowitz

After over 20 years of dispute, American internet personality and gambler Dan Bilzerian finally tweeted a public apology to our own upper school math chairperson Augustine Whyte, referred to by friends as “Gus.” The two go way back, having spent their middle school years together at Berkeley Preparatory School in Tampa, Florida. However, their journey has not been so smooth. 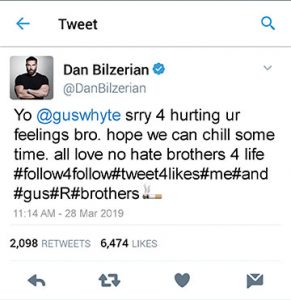 Taking on the role of “new kid” was not an easy task for 13-year-old Gus as he began his years at Berkeley Prep. A rather reserved and frail teenager, Gus made the perfect target for hefty bully Bilzerian to assert his dominance.

An incident from their seventh grade music class together would shape their relationship for the next couple of decades. After urging young Gus to attempt sitting on his seat with his legs crossed, Bilzerian was quick to humiliate Gus in front of the whole class and tease that he “sat like a girl.” Since the horrific incident, Mr. Whyte has never been the same. “It was a moment I relive in my mind almost every day,” he said. “The embarrassment and shame I felt that day in music class has caused countless tears.”

After attending therapy sessions, Mr. Whyte could not recover from the humiliation he had felt. It was for this reason he decided to reach out to Bilzerian, requesting not only an apology, but an explanation. “I thought reaching out to an internet celebrity would be a long shot, but Danny remembered me and was very apologetic,” he said.

In a recent interview with Bilzerian, he admitted that he is not proud of his actions in the past and has decided to turn over a new leaf. “I don’t like the person I have become,” said Bilzerian. “The gambling needs to stop. The parties need to stop. I am going to take some time to reflect on myself and make some changes.”

With this attitude, Bilzerian and Mr. Whyte decided to give their relationship a fresh start. While Mr. Whyte rejected Bilzerian’s offer to participate in a poker tournament or attend a strip club, Bilzerian agreed to explore the outdoors with Mr. Whyte on a hike at Glacier National Park in Montana. The two enjoyed a peaceful “bros trip,” as they like to call it, as they canoed Yellowstone River, rode donkeys and even went “hot-tubbing.”

In a recent video posted on Instagram by a fan of Bilzerian’s, the two were caught singing “99 Bottles of Beer on the Wall” as they hiked up the Highline Trail. “Even after my trips to Mexico, the Bahamas and Jamaica, I have to say my bros trip with Gus has been my favorite,” said Bilzerian. “We’ve decided to put our differences aside and embrace each other’s lifestyles – me more than him, of course.”

But after two weeks of the “new” Dan Bilzerian that Twitter fans went crazy over, Bilzerian soon returned to his previous ways. His friendship with Mr. Whyte abruptly ended once again after his recent tweet featured a photo of him with Mr. Whyte on their hike with the caption, “Gus hikes like a girl!” Mr. Whyte vows to never let Bilzerian in his life again, for fear of getting hurt. “I trusted him,” said Mr. Whyte. “I really thought he was the one that would understand me. And yet, he let me down again.”