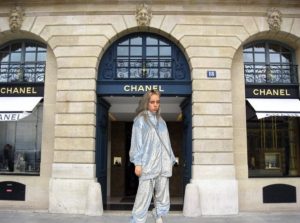 Billie Eilish was named the Creative Director of the House of Chanel this week. Photo: Isabel Battista.

Since Karl Lagerfeld’s death last month, the world has been scrambling to find a new fashion icon that would be up to the task of filling his shoes as the House of Chanel’s Creative Director. Thankfully, everyone’s favorite fashionista, Billie Eilish, has come to the rescue.

While her style may be unknown to some, her fans can only describe it as one thing: breathtaking. Her many colorful ensembles will be a welcome addition to the House of Chanel, as the designer brand hopes to widen its demographic and introduce new articles of clothing that are more accessible to the public.

Hoping to start new trends and grow among the trendy youth of the digital age as Gucci has done, the CEO of Chanel, Alain Wertheimer, announced that he had faith that Eilish would be up to the task. He released a statement on his twitter account, saying, “she [Eilish] will be the new face of Chanel for millennials and gen z’ers, which we are happy to finally announce.”

This new position will be a change for the Los Angeles singer, as Eilish will be forced to put her music career on the back burner for some time as she transitions into the world of fashion. This contrast may prove especially harsh given her relatively new rise to popularity as well as her young age as a 17-year-old. “I’m glad she got the job,” said sophomore Sarah Schultz. “I was getting a little sick of her music, anyway.”

However, this scene is not completely foreign to Eilish, as she has worked with Chanel in the past. In November 2017, she wore Chanel while attending the opening of their new Coco Club, where she also performed. It seems that the style she showcased that night and the addition of millions of followers to her Instagram opened designers’ eyes and minds to the possibility of her potential in the fashion industry. In fact, many think Chanel was lucky to get her, speculating that several other luxury brands were working to create a position for her at their companies.

Between her oversized tops, love of puffy jackets and colorful ensembles, fans are sure Eilish will bring innovative and fresh ideas to adults and lovers of haute couture. She has already introduced plans to create a new shoe line, which she claims will “attract more guys [her] age to high fashion and the House of Chanel.”