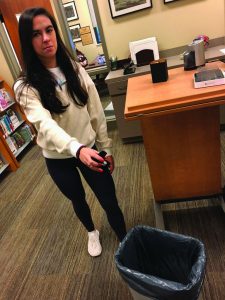 Senior Nicole Petrosky rebels and throws away her ring instead of returning it. Photo: Kalissa Greene

Recent reports reveal that the Georgia High School Association (GHSA) has stripped the Pace Academy Volley Knights of their 2018 state title due to the participation of an ineligible player, junior Sasha Ratliff. Additionally, the team has been put on probation for a year beginning Feb. 22, rendering the team ineligible for play during the 2019 season.

Last volleyball season, Ratliff was ineligible to play due to GHSA transfer rules. Allegations made by an anonymous tipster from Westminster sparked a month-long investigation by the GHSA that revealed the team violated rules by having “prior contact” with student athlete Ratliff, as the Knights allowed her to practice with the team and improperly used Booster Club funds to procure an additional coach, Jennifer Ballard. GHSA investigated three other complaints, but found that those could not be substantiated.

After listening to impassioned pleas by Pace Athletic Director Troy Baker and volleyball head coach Anna Bush, the GHSA executive board voted to uphold the loss of the state championship, demanding the return of the championship trophy. “We’re not here to deny the findings of the investigation,” said Coach Bush. “These are actions we do not endorse at Pace Academy.”

“This is not a scandal because Sasha was not recruited and has enjoyed her years at Pace,” said junior teammate Ada Jane Agolli. It was later revealed that Ratliff has not completed a full year at Pace as she arrived at the beginning of the 2018-2019 school year for her junior year. After junior teammate Lucy Ferry heard this new information, she allegedly traded in her ring at local pawn shop We Buy Gold. “Lucy originally told me to tryout for varsity volleyball for the money,” said freshman teammate Morgan Neil.

The team’s responses vary, as one of the senior captains, Alexandra Baker, wanted to help challenge the season probation, but then realized that in college she’d be ineligible to play high school volleyball. Other seniors like Paige Fleming indirectly responded by sending a heart and crying emoji to the team group chat.

It would have been completely understandable for the varsity volleyball team to simply apologize for their actions, but the cocky team continues to wear back-to-back state championship merchandise to school. Pace still shows support towards the team as Head of Upper School Michael Gannon terminated Coach Bush to “give the team a new mentality.” Mr. Gannon returned the trophy to GHSA on March 15.

This emotional battle has pushed Head of School Fred Assaf to stop posting on his photography page, https://fredassaf.dphoto.com/, as his pictures from the state championships were used as evidence against the Knights.