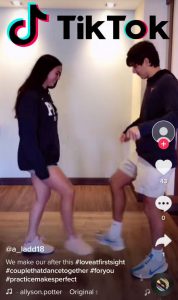 In the wake of senior Joe Hirsch’s brief stardom for his “Clash Royale” YouTube channel, another member of the class of 2019 is entering the virtual limelight. Andrew Ladden (@A_L18) is an early adopter and talented content creator on TikTok, the newest social media platform that has taken over the internet like a California wildfire.

TikTok, formerly known as Musical.ly, is a video-sharing app that lets users tape over downloaded audio files and then upload it to the world. Unlike Instagram and Snapchat, TikTok is about watching strangers’ content, not your friends’, which makes it easier than ever to go viral. Going viral is the goal of any TikTok upload, and Ladden has come to be known as a video building connoisseur.

Ladden’s specialty is internet “challenges.” In his “foot kicking challenge” video with senior Regan Bates, he blew viewers away by keeping his elbows at shoulder level the entire time. “It was truly an honor to work with him,” said Bates. “As soon as that TikTok audio starts blaring, it’s clear that the visionary within [Ladden] turns on.”

In his “run from a faraway place all the way to the camera” challenge, he spiced things up by not wearing any shoes. “It’s genius,” said loyal videographer and senior Leah Mautner. “I couldn’t even imagine doing that challenge barefoot.”

His success is due in part to his courage. One morning in the student commons he stood atop the staircase for over half of his 80-minute free taking clip after clip of fellow seniors in different positions. “I was not amused,” said junior Isabella DiMeglio. Another junior shared this sentiment. “That guy is weird,” said junior Cole Ankenbrandt.

“I can’t please everyone,” said Ladden. “If it’s random juniors in the commons or my loyal fans on TikTok, I’m taking the Sephards every time. Oh, by the way, I call my fans ‘Sephards’ now.”

Ladden’s influencer career isn’t an altruistic affair. “There’s money involved,” said Ladden. “I probably make enough on brand deals to pay for my housing at UT next year.” Ladden has already signed his lease to stay in the Callaway house at UT Austin, which is known for both outrageous accommodations and price packages for first-years. When told he should just stay in a dorm and not spend a fortune on housing, he responded, “OK, cool, hook ‘em.”

There’s no selling him short: Andrew Ladden is a TikTok master. He is worthy of all of his TikTok fame and then some. Whether or not TikTok is a worthy platform to pour hours into is a different discussion altogether.