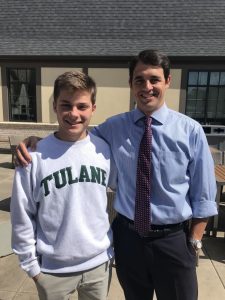 Throughout the course of his high school career, senior Charlie Hirsch has excelled in the realm of standardized testing. In September 2018, Hirsch was named a National Merit Semifinalist due to his high performance on the PSAT. In February 2019, Hirsch added another award to his record after being selected as Pace Academy’s STAR Student.

Through the STAR (Student Teacher Achievement Recognition) program, high schools in Georgia recognize the student with the highest cumulative SAT score. In order to qualify, the student must also be in the top 10 percent of the class in terms of GPA.

After being recognized, the STAR Student gets the opportunity to select a STAR Teacher who has been important in the student’s path to success. Hirsch selected Math Department Chairperson Gus Whyte, who taught Hirsch’s AP Calculus BC class during the 2017-2018 school year. “I chose Mr. Whyte because I subscribed not only to the way he taught calculus but the way he conveyed his life mindset and prioritized behavioral growth,” said Hirsch.

Hirsch has been an asset to many areas of Pace Academy. Taking full advantage of a variety of opportunities, he serves as captain of the varsity tennis team, leads The Knightly News staff as co-editor in chief and leads both the Pace Jewish Club and the Knight Capital Investment Club. Additionally, his passion for service led Hirsch and his team to raise over $240,000 for the Leukemia and Lymphoma Society in 2018.

Hirsch would like to thank his family, peers and the support system Pace has offered him. “It’s an honor to be able to represent Pace, the school that has given me everything I could’ve wanted out of secondary education,” said Hirsch.