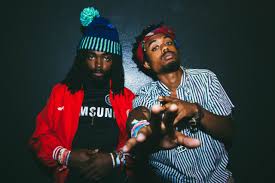 Johnny Venus and Doctur Dot of Atlanta rap group EARTHGANG are set to break out this year with the release of their next album “Mirrorland.” Photo: Wikimedia Commons

Although we are just two months into the new year, big artists, such as Offset, Gunna and Future, have all released full-length projects, with many more names to follow. Here are some of the highly anticipated rap albums of 2019.

1. Dreamville Records – “Revenge of the Dreamers III” – J. Cole leads his squad of young, talented Dreamville rappers like LeBron leads the Lakers. The recent announcement of a collaboration with the entire record label, including acts such as JID, Bas and EARTHGANG, will be a look into whether Dreamville can keep up with TDE (Top Dawg Entertainment) and compete for the best record label.

2. EARTHGANG – “Mirrorland” – Speaking of the ATL duo with the J. Cole co-sign, many are looking to their next release, “Mirrorland,” to be EARTHGANG’s breakout to the mainstream. Slowly building a reputation and loyal fan base, the tandem of Johnny Venus and Doctur Dot appears set to become next in Atlanta’s long line of successful rap groups (Outkast, Migos, Run the Jewels, etc.).

3. Chance the Rapper and Kanye West – “Good Ass Job” – Originally slated to be the follow-up to “Graduation,” Kanye has now flipped the project into a collaboration with fellow Chicago-native Chance the Rapper. Chance fans are eager to hear from him, as he has been mostly silent on the music front since “Coloring Book” back in 2016. He also has announced a solo project set to be released in July 2019.

4. Schoolboy Q – TBA – Another artist who has taken his time between releases, Schoolboy Q will follow up his critically acclaimed “Blank Face” LP from 2016. After delaying his album towards the end of 2018 due to the sudden death of his friend Mac Miller, Q now appears ready to step back into the spotlight. Look out for possible appearances from other TDE artists, such as Kendrick Lamar and SZA.

5. 2 Chainz – “Rap or Go to the League” – Atlanta native 2 Chainz made waves with his pink trap house that opened in correlation with his album “Pretty Girls Like Trap Music,” and has announced a new release scheduled for March 1. The title refers to Chainz’s days as a college basketball player at Alabama State University, as well as his proclamations that he could play in the NBA if he wanted to. It also features Lebron James as the A&R for the album.