Track and Field Races into the Season 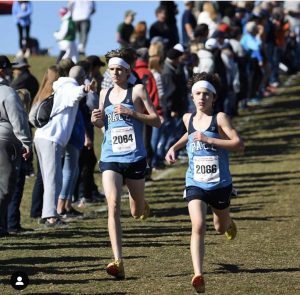 Sam Adams and George Blaha race to the end of cross country season and into track season. Photo: Justice Jackson.

Have you ever seen a group of runners heading down West Paces Ferry? Odds are it is Pace’s track team training for the upcoming season.

With winter sports wrapping up their seasons, Pace Academy has begun their busiest season of sports. Six boys and girls spring sports are busy preparing for a big spring season that the athletes hope includes many deep playoff runs and maybe even a few state titles.

The track and field team in particular has high hopes for the season, with many of the members from the team being on the very successful cross country team this year. “Running is a sport that you have to love in order to be successful,” said sophomore runner Robert Houser. The runners truly have been dedicated to the team, going on runs at least three times a week as a group. A particular group of long distance runners has gone on runs consistently in hopes of improving their times. “We all have become close which makes it fun to go on runs together,” said sophomore runner Sam Webb. The continuity from the cross country to track season will be instrumental in the team’s success this year.

With freshman George Blaha and junior George Adams supplemented by junior Quill Healey, freshman Robert Mallis and Webb, the long distance team is set for success this season. Although they have many strong runners, the team will face tough competition against experienced teams like North Hall, Lovett and Westminster. These three teams were the only ones to beat the Pace boys team, which came in fourth place past year. The Pace girls, who won third in state in cross country, return the whole team to the track in hopes of revenge against Lovett and Westminster. “It would be great to beat Westminster and Lovett after losing to them in both girls and boys in state,” said Houser.

The mid-distance runners also have high aspirations this year, led by junior Sam Adams, last year’s state runner-up in the 800 meter with a time of 1:57. Sophomores Robert Houser and Laura Romig are expected to be strong 800m and 1600m runners this year for the team. In addition, freshman Edward Blaha along with his brother George are expected to compete in some mid distance races this year.

The short distance is also ready for a big season, with Pepperdine running commit and senior Justice Jackson at the helm. “I am really excited not only to see what she (Jackson) is able to do this year, but also at the college level in the coming years,” said Coach Cunningham. The short distance runners are coached by former Olympian sprinter Terrence Trammell. Trammell received a silver medal in the 110m hurdle in the Greece Summer Olympics.

The throwers are also working hard in the weight room to improve their strength and their throws for the season. The team will have a tough time replacing University of Southern Califormia track and field thrower Ibum Obu from last year’s team, but junior Kennedy Tate has stepped up to fill Obu’s shoes in the No. 1 throwing role and has had a strong start to the season.

The track and field team started off their season with the 2nd Annual Haley Kolff Time Trial on Feb. 9, hosted by Holy Innocents’. In shot put, Tate threw right at her personal record (PR) from last season, placing her first overall. Thrower and junior Brianna Thomas pulled out a PR over last season and placed fourth overall. Junior Grant LeRoux also had a nice day with his PR, placing him fifth overall in the shot put.

Jackson and Romig teamed up for some points in the 300m and 600m. In the 300m, Jackson placed first and Romig third, and in the 600m, Romig had dibs on first place with Jackson as runner-up.

On the boys side, sophomore Alexander Swann posted a stellar race in the 600m to put him on the board with third place points. Junior Paula Sandoval had a nice showing for fourth in the 1600m and Edward Blaha blasted his PR by 10 seconds in the 1600m for the runner-up points. Freshman John Catherman won the high jump with a 5’8” jump.

The team is loaded with athletes in every event from the 3200m run to the high jump and is ready to improve their PR’s, with the main goal being beating rivals Westminster and Lovett and eventually competing for a state title.