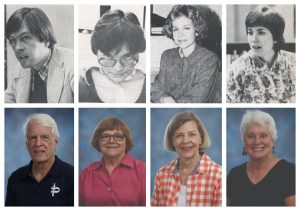 Inspired by social media’s recent “10-Year Challenge,” where celebrities and other people posted photos of themselves from 2009 and 2019 on Instagram, Twitter and Facebook, The Knightly News presents its own “40-Year Challenge.” This challenge spotlights the four teachers who have worked in the Pace Upper School for 40 years or longer. The teachers with the longest tenure are technology coordinator Neil DeRosa and history teacher Helen Smith, who both joined the faculty 45 years ago, in 1973.

Mr. DeRosa came to Pace from Georgia Tech where he earned a B.S. degree in biology. He had been giving tennis lessons to then-headmaster George Kirkpatrick, who was impressed with Mr. DeRosa and immediately offered him an interview to be an upper school science teacher. “I have really not seen much of Pace culture change,” said Mr. DeRosa. “It has always been inclusive, family oriented, with lots of leeway for teachers to create their own environment, and with an open door policy for students to communicate with teachers.”

He has remained at Pace because of the faculty and students who provide the warm community feeling. Mr. DeRosa shifted to the computer department after Pace hired a new teacher from Georgia Tech to teach AP Biology and work with computers. “I was one of those people who would take a Mac Plus and a backpack home and use it to develop my lesson plans,” said Mr. DeRosa. “That grabbed the attention of the new teacher and he asked if I would assist him as the department guru.” Mr. DeRosa also serves as long-time varsity boys tennis head coach.

Ms. Smith began teaching at Pace soon after she earned her Master’s degree in history from Emory University. Originally, she was substitute teaching at Westminster and applied for a job there. The Westminster headmaster advised her to try Pace, knowing that the school was expanding. Ms. Smith, like other teachers, has remained at Pace because of the community and inclusiveness. “Some of my best friends are teachers and/or former students,” said Ms. Smith. “I especially love the intellectual atmosphere and the curiosity in this environment. I love getting to share ideas with teachers and students.”

She remembers the time when there was no Student Council, Great American Picnic, or even Spirit week, and all classes would meet every day of the week. Pace culture has changed for her in that students have become more worried about their futures. “I think back then students brought a wider intellectual background to the classroom for many reasons, one being that now people are so focused on grades that they don’t read for fun,” said Ms. Smith. Ms. Smith has taught some current Pace teachers, such as math teacher Heather McCloskey. She also has taught many students’ parents over the years.

In 1976, Cappy Lewis joined the Upper School after earning her M.A. degree in Spanish from Vanderbilt University. At the time, she knew she wanted to use her Spanish on a daily basis and she had a passion for business. “I had never taught and I was actually looking at a career in business when I was first looking for a job,” said Mrs. Lewis. “I soon realized, though, that I was really only excited about teaching.”

Mrs. Lewis saw Pace as a warm and inviting school which she believes is very similar to today. “I am not the same teacher at all from when I first started,” said Mrs. Lewis. “I think growing up has gotten more challenging, so teaching has too, and it’s certainly more interesting.” Along with being a Spanish teacher she has served as world languages chair for many years. Mrs. Lewis loves being a part of her students’ progress throughout their years and is always ready to contribute to their success with extra help.

Exactly 40 years ago, Marsha Durlin joined the Pace community as an English teacher for ninth and 11th graders. She was also responsible for the junior high drama program. “I think the Pace culture has steadily gotten better because the school has built on its success,” said Mrs. Durlin. “It is probably more academically rigorous and we have hired good people for leadership, headmasters, deans and faculty.”

In addition to teaching, Mrs. Durlin founded the Peer Leadership program at Pace in 1981. Mrs. Durlin credits her modern teaching style to senior dean and English teacher, Erica Barbakow. “She [Ms. Barbakow] had been teaching at an all-Harkness method school which is a student oriented discussion-based course rather than a lecture,” said Mrs. Durlin. “That is definitely a big change in the English department, and my class especially.” Mrs. Durlin serves as chair of the English department and teaches ninth graders along with seniors taking AP Language and Composition.