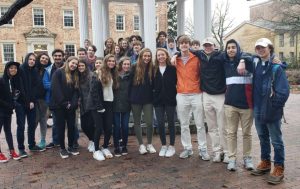 Pace sophomores and juniors enjoy their time at the University of North Carolina at Chapel Hill. Photo: Krista Wilhelmsen

A group of 46 sophomores and juniors took advantage of the long President’s Day weekend by getting a head start on the college process. They toured schools in North and South Carolina alongside college counselors Jonathan Ferrell, Pam Ambler and Ben Wescott, as well as junior dean Grady Stevens and sophomore dean Krista Wilhelmsen. The goal of the trip was for students to get an insight into the college application journey, explore different campus sizes and engage with student life at the collegiate level.

Early morning on Friday, Feb. 15, the group departed from Pace and headed to South Carolina to tour Clemson University and Furman University. Many students found a particular interest in Clemson because it was considered a “football school,” implying that a lot of Clemson’s culture revolves around sports. However, others saw the university as too big and were worried that finding a tight-knit group of friends at such a brand-name school could be difficult.

Later that day students found Furman University to be a big campus, but a very inclusive college. Sophomore Lily Kahn enjoyed the warm feeling she got when she stepped foot on the campus. “I’m not sure if it was the purple color that caught my attention or the vast green space, but the campus was beautiful,” she said. “I can definitely see myself there in a couple years.” Many students specifically loved the lake at the back of the campus filled with ducks because it was calming.

The following day included visits to Duke University, North Carolina State University and University of North Carolina at Chapel Hill. Duke brought out many reactions from the sophomores and juniors because of its collegiate Gothic architecture. “The buildings were so tall and castle-like; I hadn’t seen anything like it,” said junior Will Rehmert. “I know it will be tough to get accepted into but I feel so much more motivated now.” For some students, the best part about being at the home of the Blue Devils was the large number of restaurants and cuisines on campus.

At UNC, the tour was led by Pace alumni Mary Stuart Gray ’16 and Harrison Lewis ’18. Chapel Hill got the attention of the whole group because of the miniature college town centered around Franklin Street, located right next to the campus. “Talking to the UNC students in the campus bookstore, they were all so generous and willing to help,” said sophomore Peyton Smith. “For me it was the welcoming community of students there that I enjoyed.”

The next morning was hard work for the lacrosse players. Coach Stevens insisted that they bring their lacrosse sticks on the trip because, as he put it, “there are no days off.” The athletes had to wake up early that morning to go out on a 30-minute run, followed by lacrosse drills while the rest of the group slept in. “I’m not going to lie, the run was tough, but it’s good to stay in shape, even on vacation,” said junior Evan Duncan.

Once the lacrosse boys returned, the bus took off to Elon University, Wake Forest University and High Point University. “Elon was nice, however, I feel like it was too similar to Pace with the types of organizations, resources and features it had,” said sophomore Gus Thomas. “Personally, I want a different college experience than what I got in high school, so I wasn’t too drawn to Elon.” Some, though, loved the similarities between the university and Pace. They specifically liked the fact that Elon had a diversity club like Pace and a student lounge similar to the Seaman Family Student Commons.

At Wake Forest University, the group met up with Pace alumna Jillian Paul ’16 for a guided tour. Despite the cold and rainy weather, the students seemed to enjoy the campus and its layout. “I was freezing but so into the campus and its buildings that I was able to hide my shivers,” said junior Sophie Lettes. Many of the Pace students were interested in the different facilities in the gym and how much there was to do from weight training, cardio, basketball courts, swimming pools and even an indoor rock climbing wall.

Feb. 18 was sad for most students, who were dreading the return to school. Only Davidson College remained before the long commute home, and the students were looking forward to one last trip together. Davidson, known for its relatively small population of roughly 2,000 students, did not awe many of the Pace participants besides the fact that NBA phenomenon Stephen Curry attended the college. “The campus was great, partially because this was the only day with sunny weather,” said sophomore Robert Houser. “It just was too small for me with only about 200 more students than Pace. I enjoyed NC State because it was the perfect number of people. Go Wolfpack!”