Seniors’ Second Semester Is Harder Than Ever 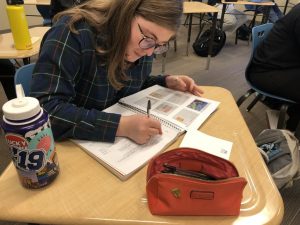 Since classes started back up after the winter break, I have heard the term “second semester senior” being used more and more often. For most seniors, this is not new terminology to us, as most students in the Upper School recognize this term as the epitome of high school: the finish line right before college, as you experience the easiest semester of your life.

Teachers excusing classes early or even canceling them altogether, giving softball tests and quizzes, and assigning a homework load that is basically nonexistent are just some of the attributes that combine to create my vision of what a “second semester senior” experiences.

This idea of a semester-long party for the senior class is what has motivated me throughout my freshman, sophomore and junior years. However, now that I have achieved the rank of “second semester senior,” it’s safe to say my hopes for a smooth ride thus far have been shattered.

Classes have been harder than ever, as teachers have been packing in the facts. While slightly slacking off or goofing around in class might have been acceptable in the past, classes are now nothing but business. What I find to be odd is how some classes were excused earlier during the first semester while those same classes now have to stay for the whole period. It feels like this should be the other way around.

I have spoken to several students in the senior class and they all feel the same increased stress and workload. “This is the hardest semester of my life,” said senior Luisa Whitney. “I feel like we have twice as much work.” This seems to be a pattern, as seniors from last year have told me of similar situations during their second semester. From the seniors’ perspective, this intensive learning seems like torture for students who have, for the most part, already been accepted to their colleges. However, from the teachers’ perspective, I can understand why they don’t want the seniors to slack off this semester.

Unfortunately, while the idea of a “second semester senior” is fantastic for students, it is most likely a nightmare for the teachers. The notion that for a whole semester, the oldest students in the school will be lollygagging around, skipping classes and causing a riot is unsettling for most teachers. Therefore, there is an inkling that there is some inherent bias towards seniors in the back of most teachers’ minds to view them as troublemakers.

However, the intentions of most teachers are often quite harmless, as they just want what is best for the senior class. The teachers understand that, while we are so close to the end, we are not there yet, and goofing around the last semester is no way to leave the school, with the reputation of rascals. And while the feeling that classes are impossible might be exaggerated due to the close proximity of our graduation, the second semester of my senior year still has been one of the most difficult semesters of my high school career.