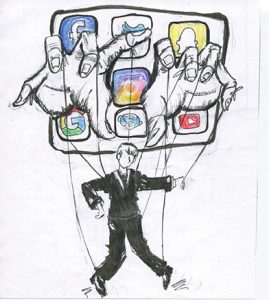 Google and other tech companies have abandoned their founding doctrine of conduct, “Don’t Be Evil.” Illustration: Kathryn Hood

One night, a few of my friends ordered two medium pizzas from Domino’s for $12  and bragged online about their economical eats. A few others reminisced about the time they Birded to the Hawks-Thunder game. The next day, I open Instagram to ads for Domino’s, Bird scooters and the Atlanta Hawks. Sound familiar?

Classmates report this mystical advertising phenomenon every day, concluding that apps like Instagram and Facebook are “listening” to them. Though these apps don’t actually “listen,” the powerful ad techniques that produce this magic allude to a broader problem.

Through ad networks like Facebook Audience Network (FAN) and Google AdWords, tech companies build a profile on you by accessing your internet habits, your friends’ habits, your location throughout the day, your online purchases and more. The reason the magic ads seem to happen more frequently is that these companies are refining their targeted advertising methods and they are rapidly improving.

This “profile” gives the companies enormous power over their users, which can be used to subliminally persuade entire communities. It is for these reasons, concomitant with other malicious, self-serving users, that we must teach “digital literacy” in schools.

Instagram has over 1 billion monthly active users and Snapchat has over 300 million (Omnicore). According to CNBC, Google has seven products with over 1 billion monthly active users, including video streaming behemoth YouTube. Results from a recent Knightly News survey show that 66 percent of students watch YouTube, 84 percent use Snapchat, 87 percent use Instagram and 98 percent use Google every day. These percentages vastly exceed national averages, revealing the disproportionate use of these products among high school students.

Snapchat’s new interface puts front and center clickbait headlines: “TOP 10 FACTS ABOUT KYLIE JENNER,” “WHAT DOES YOUR LEFT PINKY TOE SAY ABOUT YOUR FUTURE SPOUSE,” “IS THERE AUTISM IN YOUR DRINKING WATER?” If you don’t click the story the first time you scroll past it, Snapchat will change the headline over and over again with the aim of flipping a different switch in your brain, making you click.

Deceit is also obvious on Instagram, where the “World Record Egg” picture is flooded with comments touting “weight loss supplements that actually work” and “innovative workout routines that get you shredded in 28 days.”

Harder to perceive are the engineered fake news stories that pervaded social media leading up to the 2016 U.S. presidential election and very well may have swayed its outcome. The Knight Foundation found that in the lead-up to the election, more than 6.6 million tweets were linked to fake news and conspiracy news publishers. Now, the foundation reports, “more than 80 percent of accounts that repeatedly spread misinformation during the 2016 election campaign are still active, and they continue to publish more than a million tweets on a typical day.”

Also, in 2017, UK researchers found massive bot networks on Twitter, with groups of up to 500,000 accounts operating in coordinated action to engage users. Pew Research reports that 68 percent of adults get news content via social platforms, and since this number will only increase as our generation gains political clout, we must become digitally literate before we have the power to make decisions for our country.

Digital education is so important because kids have unprecedented freedom on the internet, giving big companies avenues to reach younger audiences without parental screening and brainwash them while their brain is still developing.

Digital literacy means having the critical thinking skills necessary to navigate the internet responsibly. This means that every time we open social media, we acknowledge that we are entering an unforgiving, lawless realm that’s trying to turn you, the user, into revenue.

This means that we know we are interacting with giant, for-profit companies, answering chiefly to shareholder profit. Companies that forget about the well-being of their customer base and spam us with unsubstantial content, fake news and targeted ads. Companies that will crush the soul of its clientele if it means a bump for its stock ticker.

It is our fault that tech giants have this power, but it’s not too late. Digital literacy education should come in the form of semester-long middle school co-curriculum courses. It should be the emphasis of ninth grade Transitions meetings. It should take up a unit every year in our English courses.

NYU Stern Business School Professor Scott Galloway in a 2017 Ted Talk says that “Google has become the modern man’s God” in that we instill our greatest trust and offer our most thoughtful questions to Google.

Small changes to our curriculum that empower us to strip Silicon Valley superstars of their “God-like” capabilities and form us into digitally literate “citizens of the world” would be easy to implement. Structured digital literacy courses at school would provide the necessary foundation for an electorate skilled in tackling the obstacles of the digital age.