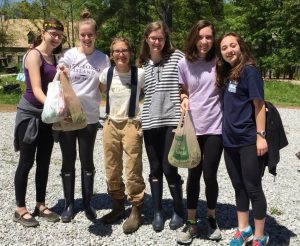 Being a Girl Scout is about more than being just an adventurous, cookie-selling young woman. March 12 marks National Girl Scout Day, celebrating the girls who embrace all that comes with being a G.I.R.L. This acronym, pawned by the Girl Scouts organization, represents girls who are Go-getters, Innovators, Risk-takers and Leaders.

Founded in 1912 by Juliette Gordon Low, Girl Scouts of the United States of America has flourished for over a century, helping girls develop leadership and other crucial life skills. The organization fosters challenges and creates an environment where girls from the age of five to 18 feel comfortable trying new things.

Sophomores Jordan Benjamin, Abby Sroka and Olivia Ullman have participated as Girl Scouts for most of their lives. Benjamin started her career as a Girl Scout 10 years ago. She meets with her troop about once a month, and her highest recognition has been the Silver Award, which she earned in the eighth grade after partnering with Sroka and Ullman to donate tote bags to veterans at the Veterans Affairs (VA) hospital. “My favorite part of being a Girl Scout is definitely all the friends I’ve gained,” said Benjamin. “Some of the girls in the troop go to schools like North Springs, Riverwood and Marist, and we are all extremely close.”

Sroka became a Girl Scout in Kindergarten, and she has been with her current troop since the sixth grade. In addition to making many new friends, Sroka has earned her Silver and Bronze Awards. “I plan on finishing my Gold by the end of junior year,” said Sroka. She looks forward to her troop’s trip to Iceland this summer.

Ullman, who started participating in Kindergarten as well, has loved getting to know and hanging out with the many girls she has met through the organization. Ullman feels that committing to being a Girl Scout is not hard to do. “Around cookie season, if you choose to sell, it takes some work, but it’s overall pretty relaxed,” she said.

So far, Ullman has earned a Bronze Award and a Silver Award. She is working on her Gold Award, which takes over 200 hours to complete. One of her favorite experiences is helping the younger troop members become “crafty entrepreneurs and leaders in their own communities.”

Senior Caroline Singleton became a Girl Scout in the first grade, and she has been an active participant ever since. According to Singleton, participation doesn’t require a huge time commitment. “We meet a few times a year to reconvene,” said Singleton. “None of the girls in my troop are going for the Gold Award, which would require a lot of time and effort.”

However, Singleton has received her Bronze and Silver Awards, along with many badges. “The badges are basic and everyone can earn them if they try, but earning an award requires an idea and execution,” said Singleton. For her Silver Award, Singleton worked with senior Kathryn Reisner and hosted a scout uniform drive, providing families who were unable to pay with free uniforms.

Singleton values the lessons that being a Girl Scout has taught her. “I’ve learned the qualities it takes to be a good leader, and I’ve gotten to meet a lot of people and improve my people skills,” said Singleton. “Overall, I’ve gained confidence.”