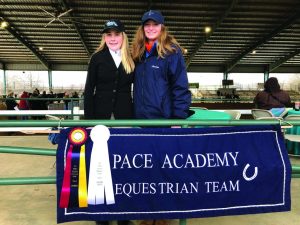 On Feb. 10, junior Lauren Stebbins and eighth grader Anna Nuckols competed on Pace’s equestrian team in the postseason regional finals. Stebbins finished first overall and was named High Point Rider of the season while Nuckols came in fourth place. As a result of Stebbins’ first place finish, she is moving on to Zones, the next round of the postseason.

Stebbins began taking lessons in third grade. She currently rides between five and six times a week, each time about for about three hours. “It’s kind of a big time commitment, but I love it so it’s worth it,” said Stebbins.

This will be Stebbins’ second time competing at Zones. She first made it in eighth grade with her team. “It’s been awhile since I’ve been back, and it’s really exciting to make it individually,” she said.

She is getting ready for Zones by continuing her training and practicing some of the tasks she may be faced with. “Since it’s zones, they are allowed to ask us to do difficult exercises so that might be a little stressful,” she said. “It’s [also] against all the top riders in our zone, so it’s going to be tough competition but I’m excited.”

Ms. Merritt has enjoyed watched Stebbins throughout the season and seeing her improve and develop her skills as a rider. “She is a really awesome rider with some strong instincts, and I feel like how she performed at regionals and how she was awarded is what she has deserved all year,” said Ms. Merritt. “It was great to see her get the recognition she deserves and hopefully she can go and continue that trend at zones,” said Ms. Merritt.

Stebbins will be competing at Zones in Pensacola, Florida from Mar. 22-24.