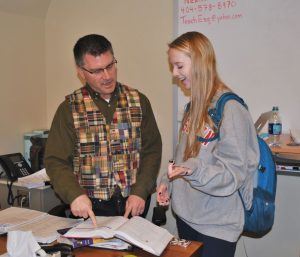 After 12 impressive years, Pace will be saying goodbye to beloved upper school teacher Keith Newman at the end of this school year. While Mr. Newman looks forward to moving to Indiana to be near his extended family, he looks back on his time at Pace with pride and describes Pace as his “dream job.”

“I’ve taught so many different things and brought so many different courses to Pace,” said Mr. Newman. Since he started his job at the school, he has added four courses to the curriculum: Discrete Math, AP Economics, Business Law and Ethics and Non-AP Statistics. “When I came here, I created the Discrete Math class to show students that math can be used in other areas that they never thought they would need,” said Mr. Newman.

Mr. Newman said that Business Law and Ethics was fun to create because students have a lot of questions that you wouldn’t even think about. He started statistics because he feels statistics might be the most valuable math anybody can learn. “You can’t get through a day without hearing statistics, so its good to understand what it means,” said Mr. Newman.

Mr. Newman has a business background – an MBA with an emphasis in finance – so he jumped at the opportunity to teach an AP Economics class. “That’s been so much fun to create,” said Mr. Newman. “We need more women in economics. We need to graduate strong economic students from a school like Pace.” His first year teaching AP Economics, there were only three females in the class. The second year, only two enrolled. Now there’s a 50-50 male-female split in both sections he teaches.

“Pace has allowed me the ability to do all that,” said Mr. Newman. “I have four different degrees, and I feel like Pace has allowed me to use a lot of that. I haven’t been pigeonholed.” Mr. Newman’s degrees include business management, the Masters in Business Administration, a Juris Doctor and a math degree. In addition to the courses he created, he taught Algebra I, Precalculus and Algebra II.

But after his resume got into the hands of Lolly Hand, the Pace Head of Upper School at the time, she called him asking if he was interested in an interview at Pace and meeting some people. “I thought, ‘never say never,’” said Mr. Newman. “I came down and everybody was really nice but when I was interviewing. I was given a student tour and that was the moment I thought, ‘that’s something special.’ In 12 years, the students have never let me down.”

Mr. Newman and his husband Ken Warren bought a house in Indiana last year that they have been renovating. Once the school year ends, they will live there full time near Mr. Newman’s extended family. “I will be continuing to teach, likely in the public sector,” he said. “There’s a lot of innovative schools up there in the public sector.” He will continue teaching the same subject areas, but Mr. Newman thinks he will probably teach more math. Mr. Newman will also stay involved in renovating houses. “I don’t flip houses because I don’t fix them and resell them,” said Neman. “I fix them up, keep them and rent them out.”