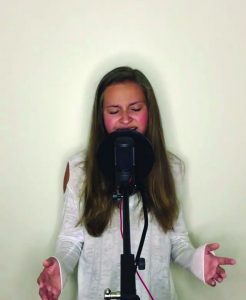 Sophomore Kate Mallard represented Pace at the Georgia Music Educators Association’s (GMEA) All-State Chorus competition Feb. 14-16 in Athens. The purpose of All-State is to provide local choral students from grades 7-12 with an opportunity to rehearse and perform with a group of students with the most advanced skills in singing and musical reading. During the event, Mallard practiced three days with six renowned conductors from around the country and performed on the last day.

Mallard has been singing for seven years, since her start in third grade. Initially just participating in theater outside of school, Mallard soon began to perform solos for Pace productions. “Singing has always been natural and fun for me,” said Mallard. She enjoys exploring and discovering different tones in her voice and singing different types of music, “whether it’s pop, R&B or choral pieces for All-State.” Now she is inspired by artists like Tori Kelly, who “write so much of [their] music and create meaningful lyrics.”

Mallard sings constantly at home and takes chorus at Pace and voice lessons at Mama Jan Studios in Atlanta. Mama Jan, a Grammy nominated producer and Georgia Hall of Music inductee, works with big names in the music industry such as Drake, Justin Bieber and Nicki Minaj. The number of hours Mallard practices a week depends on her need to “practice with choral extracurricular groups after school, prepare for an upcoming performance or prepare for All-State.”

The process to get selected for All-State chorus is challenging. In the first audition, everyone sings a given piece and then sight reads for the judges. In the sight reading portion of the audition, the singers are given three staffs they have never seen before and starting pitches. Then they must sing each note while keeping a steady tempo. In the solo portion of the audition, students sing scales and a prepared piece in a chosen key. As they audition, the judges mark down feedback and scores.

The singer’s chorus teacher notifies their student if they passed the audition and are given seven pieces of All-State choral music. For the second audition, competitors learn the songs on their own by sight reading and using recordings. In this audition, the singers sing a small section of each piece, but the piece is unknown until the audition, so students have to be ready for anything. Once the singer makes it through the second audition they are officially selected.

Mallard’s All-State experience was a success. “It [was] a lot more serious and meaningful at the rehearsals than it is in chorus class at Pace and I loved it,” she said. “I met a lot of nice and interesting people and had a great time walking around Athens.”

In the past, Mallard has won Pace Cabaret, “Chorus Student of the Year,” and was an Arts Laureate nominee as a freshman. In the future she wants to remain strongly connected to music whether its working in the industry or just taking time to sing on a regular basis. She plans on trying out for All-State again junior and senior year.