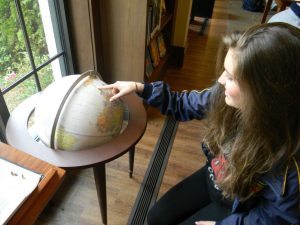 Junior Klara Andra-Thomas points out the countries that her parents are from, Iceland and Czech Republic. Photo: Francesca Vaneri

While Pace has made a significant effort in the past few years to promote diversity and inclusion, students often forget one of Pace’s smaller demographics – international students. These students, who are first or second generation immigrants, make up about 5 percent of the upper school population. Most Pace students are unaware of the different cultures represented by their classmates.

Altogether, Pace international students represent roughly 15 different countries, from Pakistan to France to Colombia. Many of these students are not only multicultural but also multilingual, speaking languages from Hindi to Icelandic.

According to the U.S. Department of Education, the number of “New Americans,” or first or second generation immigrants, has increased significantly in the past few decades. As of 2017, one quarter of all U.S. students are first or second generation immigrants. Pace’s enrollment of international families has accordingly increased. “Multilingual and multicultural families add a different perspective to our community, and can help educate our community about their experiences and their beliefs,” said Pace Director of Admissions Jennifer McGurn. Behind each international student can lie deeply interesting and relevant stories, heritage and experiences.

While the immigrant experience at Pace differs for each individual student, one thing is consistent: these students are often grateful and feel that their ethnic culture is an integral part of their personality. “It’s cool to have a different culture and be able to speak a different language,” said junior Klara Andra-Thomas. “It makes me different.” Andra-Thomas’ mother is from Iceland and her father is from the Czech Republic.

Junior Paul-Louis Biondi, whose parents are from France, agrees. “I love being part of a different culture,” said Biondi. “I do feel like I sometimes have a different perspective on something someone else might not have thought about because of their upbringing.”

While some students feel a strong connection to their family’s heritage, others feel less of one. “I definitely feel a connection to Iceland, but it’s a thin connection,” said Andra-Thomas. “I feel more American than Icelandic.” Junior Rekha Sashti, whose parents and grandparents are from South India, feels a similar sense of attachment. “I definitely feel very American, because I was born here and I grew up here,” said Sashti. “But I’m also interested in and appreciative of Indian culture, and I did a study abroad program there over the summer so I could immerse myself more in it.”

Pace international families came to the United States for a variety of reasons. Sometimes, it was just chance. Junior Ada Jane Agolli, for example, is known for her volleyball prowess, a talent that runs in the family. Both of her parents, who are Albanian, played for the Albanian national team, and her father even competed in the 1992 Olympics in Barcelona. “My parents won the green card lottery a few years before I was born, and even though it was a really difficult decision for them because they had athletic careers, they decided to come and try living here for a few years,” said Agolli. “They ended up liking it, so we moved here permanently.”

Some families came because of financial and political reasons. “My parents came to the U.S. on a vacation, and they ended up deciding to apply for a visa,” said sophomore Dylan Kaminski, whose parents are Polish. “Poland was a communist country at the time, and they wanted to live in a place where their businesses could do well. They wanted a better life for me.”

While being multicultural can have significant advantages and upsides, growing up in an immigrant family can also present challenges that most Pace students don’t encounter. Some students struggle to mediate between the culture they experience at home and the one they experience while at school or during daily life in America.

“It’s the concept of the hyphen child, such as Mexican-American, or Asian-American,” said Biondi. “Coming between two cultures, you have to find a way to bridge the gap, often by asserting your other identity in one culture’s dominated space – for example, my French identity at school. Otherwise, you feel like you’re losing a piece of yourself. That culture is so integral at home that it feels weird to not have it in another environment. On the other hand, at home, you also want to assert your American identity, because that’s an important part of you as well.”

For many students, having a broader cultural perspective makes them more aware of the privilege they experience at Pace. “I understand that my parents made a big sacrifice, in part so that I could grow up with a lot of opportunities,” said Kaminski. “They had to start over in another country, and they gave up financial stability and the life they were used to. It motivates me to really take advantage of my opportunities and my education because I don’t want that sacrifice to be in vain.” Andra-Thomas agrees, saying, “I think that being a child of immigrants has given me a strong work ethic.”

Some students also spoke about uncomfortable and even discriminatory behavior that they or their families faced. “Even though most people are polite and interested, in the tense political climate there is right now, sometimes you don’t know how people will react to certain things,” said senior Veronica Sandoval. Sandoval’s parents are from Columbia, but she has also lived in Spain, South Africa and Holland. Recently, her uncle and cousins spoke Spanish in a grocery store and were harassed by a man who told them to “go back to their country.” “Now, sometimes I feel uncomfortable speaking Spanish with my family [in] certain places,” she said.

Many students notice that it’s mostly ignorance, rather than dislike or discrimination, that usually leads to misunderstandings. “There’s a misconception that every country in Central or Latin America is the same when in reality, they’re completely different cultures, and I think that can create stereotypes and assumptions,” said Sandoval. “People will say things, and make jokes, and they might not understand why a comment isn’t funny. For example, I’ve had people ask me if I ‘jumped over the wall.’ It’s obviously a joke, but it’s also not really funny.”

Kaminski noticed that one particular point of discomfort can be his parents’ accents. “My mom has a very strong accent, while my dad has less of one, and I think there’s a difference in how they’re treated sometimes because of that,” said Kaminski. “Sometimes she just needs a second to translate things in her head, and people can be rude or impatient with her because of that, instead of appreciating the fact that she’s doing her best to communicate with them in her second language.”

Another similarity in many students’ experiences is having perceived a change in acceptance and tolerance over time. “I think as long as Pace keeps promoting diversity the way that it does, and keeps promoting learning and keeping your eyes and ears open all the time, then it can create change, and it already has,” said Biondi. “In elementary school, I had teachers tell me I shouldn’t speak French because it would be detrimental to my education. I don’t think that that’s something that teachers would think or encourage now, and I think Pace’s focus on diversity is a big part of that.”

Andra-Thomas also faced challenges in elementary school related to her background. “Even though it was only a few years ago, when I was in elementary school people were less open to diversity and change, and I felt sometimes like I didn’t belong,” said Andra-Thomas. “It’s definitely different now, and I don’t just think it’s a matter of age. I think it’s a general movement.”

The representation of different ethnicities and cultural backgrounds is often a forgotten part of diversity, but the duality of experience that comes with being bicultural and bilingual allows international students to share a perspective that the Pace community might not otherwise hear. “If our mission is to create prepared, confident citizens of the world, we clearly need a global perspective and a global mindset by all members of our community,” said Mrs. McGurn. “Pace was founded as an interfaith school, and those core values are really important today, and it’s essential that we have a great representation of diversity, walks of life and cultures that blend together to make up our community.”

“I think it’s really special to be a child of immigrants,” said Biondi. “Immigrants have really great stories, and great things to share and impart with the world, and if people are open and listen, they’ll realize that.”