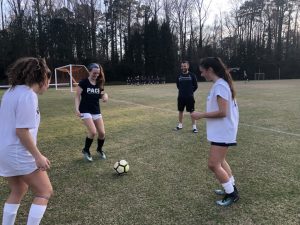 Born and raised in Coatbridge, Scotland, Pace fourth grade teacher Declan Traquair is a new girls varsity soccer coach this year. Coach Traquair earned his Bachelor of Science degree from Young Harris College, where he also dominated the soccer field. “I have played soccer since I can remember,” said Coach Traquair. “I always played club all the way through school, so my reason to come to the States was to play soccer in college.”

From teaching in the Pace Lower School since 2014, Coach Traquair became acquainted with lower and middle school physical education teacher Liz Tutt, head soccer coach for the varsity girls team. “I have been coaching ever since I left college where I played, and I missed it so much I wanted to get back into coaching,” said Coach Traquair. “Luckily enough, Liz approached me and asked if I would like to be involved and you can’t say no to that.”

From coaching, playing, watching or even attending soccer camps, Coach Traquair is always involved in soccer, whether that be during the week or on the weekends. When he’s not coaching at Pace, he coaches soccer at Smyrna Soccer Club.

Coach Traquair has high hopes for the girls team this year and sees a lot of potential. “I’m really enjoying working with this group of girls,” he said. “I think we have a really talented squad and I really think we can go far this year.”

As far as improvement goes, Coach Traquair believes that there is room for more unity among the teammates. “I think we can have more inclusion,” he said. “It seems like there’s a separation between grades right now and I would like to see freshmen stepping up and being leaders and I’d like to see seniors including everyone in the group.”