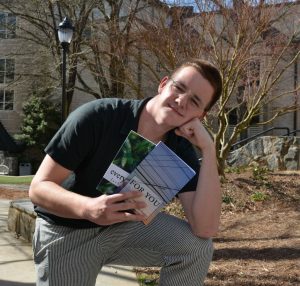 Brown has written two books, “For You” and “Everything,” which both received positive feedback from his classmates and family, as well as recognition in writing competitions. Photo: Mary Childs Hall

Most 16-year-old teenagers spend their days learning at school, followed by auditioning for the school play or practicing a sport. Rarely do you hear of a young teenager spending their time writing and publishing their own books. However, this is the case for sophomore Jack Brown. He works hard to fit writing into his busy schedule, which includes singing in Pace’s theatre program, painting and drawing in the art classrooms, and uploading videos to YouTube.

Brown, who found his true passion for writing in middle school, fell in love with the way in which he could express his emotions through words. He spends his time journaling and writing poetry in order to reflect on different aspects of his life.

“I first started getting into poetry in seventh grade when I realized that I was gay,” said Brown. “It was really helpful for me to cope by writing about how I was feeling.”

According to Brown, he likes to take all of the thoughts in his mind and transfer them into words in order to truly deal with what he’s going through. “I have always been such an emotional person so it’s good to get that out through writing,” said Brown.

Within the past year, Brown has written and published two books, entitled “For You” and “Everything.” “I began working on ‘For You’ in the summer after eighth grade, and the final product came out in January of 2018,” said Brown. “For You” is a reflection of Brown’s life, expressing some of his deeper feelings through a series of poems and prose pieces. “Neither of the books I have written has a set storyline, but are rather just a series of poems,” said Brown. “I like this more because it allows people to be able to turn to any page and read.”

Taking several months to perfect “For You,” Brown rewrote the book multiple times in order to satisfy himself. “In writing this book, I had to do a lot of self discovery, which ended up being very emotional and raw,” said Brown. “The whole process was all for me, which is kind of ironic, because the book is called ‘For You.’”

Seven months after the release of “For You,” Brown released his much anticipated second book, “Everything.” Unlike “For You,” “Everything” has more diversity in subject matter, combining different poems that Brown had written during his “off season.” “I am big on writing about love and sadness, but I wanted with this book, for people to be able to find something that resonated with them,” said Brown. “I would like to think that ‘Everything’ includes something for everyone.”

In order to publish his books, Brown used a company on Amazon that lets people self-publish, allowing for the writers to keep all rights to their manuscripts. With each copy retailing at $15, Brown made a profit; however, that was not his goal. “It wasn’t really about money for me, but rather about accomplishing something with writing,” said Brown. “I feel like it is fun to write poetry, but it’s a lot cooler to be able to say that I have a book out that people can purchase and read.”

Brown has a large fan base, including his friends, their parents and his teachers, who all support his books. On his Instagram account, where he promotes his books, Brown has received positive feedback, with many people expressing their excitement for him through their comments. “Jack is very motivated and expressive, and I see him having a bright future,” said close friend and fellow sophomore Ashley Myers. “In a few years, I see him ending up in a city like New York City or Chicago where he will be able to pursue his passions.”

Recently, Brown received a Silver Key for his poem “a piece of everything” and an Honorable Mention for another piece entitled “blinded” in the Scholastic Art & Writing Awards competition. Additionally, a poem titled “no” from his book “For You” was published in an anthology called “Of Love and Dedication.”

Although Brown mostly sticks to writing, he also loves to express his emotions through visual artwork, like drawing and painting. “He likes to combine his art and poetry, like how he sometimes puts words on his paintings, said Myers. Brown hopes to continue his artistic interests in college, where he wants to study film animation and cartooning. “Poetry is more for me, and art is for my life,” said Brown.