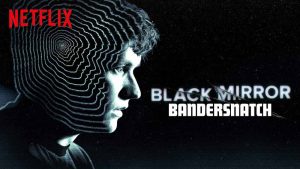 ‘Black Mirror: Bandersnatch’ can be found on Netflix. Photo: Netflix

With all the wealth and attention Netflix has gotten over the years, the huge streaming platform that can be found in nearly every household has been able to produce its own Netflix Originals. By releasing its own movies and television series, Netflix has been able to dip its toes into all kinds of creative concepts. And while many of these Originals can be duds, with little to no theatrical value, some can be quite good, including series like “Stranger Things,” “House of Cards” and, of course, “Black Mirror.

The hit series “Black Mirror” has been tremendously popular among Netflix subscribers, as each episode depicts how different innovations in technology foster chaos and destruction. What is scary, and possibly what makes the show so attractive, is how similar some episodes are to the real world. For example, China is currently employing a housing system that is very similar to the system used in an episode of “Black Mirror” called “Nosedive.”

Four seasons of the show have been released on Netflix. However, instead of dropping a new (fifth) season of episodes, Netflix released its first “Black Mirror” movie: “Bandersnatch.” Taking place in the 1980’s, this movie follows the actions of Stefan Butler, a young programmer, as he attempts to adapt the dark fantasy novel “Bandersnatch” which involves alternate paths and diverging realities, into a video game. What is really innovative about this edition of “Black Mirror” is how you, the watcher, can make choices for Stephen, some of which greatly affect the story.

During the movie, when Stefan is met with a dilemma, two options pop up on the bottom of the screen for the person watching to select one. This allows for several variations of the story, as different choices lead to different conclusions. In this way, as soon as one version of the movie is completed, there are four or five other variations of the film that the watcher can still enjoy. This interactive-style movie is a first for Netflix and has proven to be very popular among subscribers.

“Bandersnatch” takes a different approach to its theme of innovative technology, presenting the mental dangers of technology compared to previous “Black Mirror” episodes, which show the physical harm technology can cause. The whole movie can be very complex because the themes explored by characters in the movie are also part of the interactive experience.

The game Stefan programs, “Bandersnatch,” allows for the main character to make decisions that affect the overall story. This can become a bit confusing, though, because the person watching is basically playing their own version of “Bandersnatch.”