Alliance of American Football: What You Need to Know 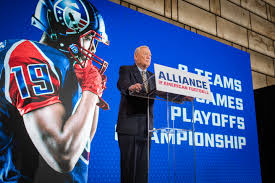 Co-creator Bill Polian addresses the crowd at the announcement ceremony for the AAF. Photo: Wikimedia Commons

Are you searching for a way to get your football fix during the NFL and NCAA offseason? Enter the AAF, also known as the Alliance of American Football. Co-created by NFL Hall of Fame executive Bill Polian and TV producer Charlie Ebersol, this newcomer looks to fill the gap between the Super Bowl and the beginning of the college season in early September.

Recently, after worries of the league not being able to make payroll after just the first week of the season, Carolina Hurricanes owner Tom Dundon invested $250 million and is now chairman of the league. This league, if able to avoid the financial woes that took down other start-up leagues like the United States Football League (USFL) from the 1980s and the first iteration of the XFL from the early 2000s, looks poised to be a serious filler throughout an otherwise football-devoid period.

What the AAF has going for it most of all are the numerous big time names that have signed on. The coaches include legends like Steve Spurrier and Mike Singletary, both of whom are Hall of Famers. The rosters boast college standouts, such as Trent Richardson and Zach Mettenberger, as well as some familiar NFL names that have since fallen out of the league like Matt Asiata and Bishop Sankey.

However, the most intriguing name comes at the backup QB position. This slot belongs to all-time Georgia Bulldogs passing yards and touchdowns leader, Aaron Murray. After bouncing around in the NFL for a few years, Murray spent this offseason training at Pace in preparation for this upcoming season. Although Murray has not seen much playing time so far, a stagnant Legends offense could lead to changes coming soon.

Another attraction of the AAF is the experimental rule changes that create a different game than what is seen in the NFL and NCAA. Most obvious of these changes is the eradication of kickoffs and extra points, with teams now receiving the ball on the 25-yard line after each score and going for a 2-point conversion after every touchdown.

Other changes include the ‘onside conversion,’ when a team wants to attempt an onside kick, they must now convert a 4th-and-12 to retain possession. Finally, teams are allowed to rush only five players as offensive lines build chemistry; however, this rule may be subject to change as the league evolves.

The AAF, if nothing more, gives fans a chance to see the game played a different way from the traditional NFL and NCAA. The league’s social media presence and interesting new rules allow for substantial growth, and could potentially lead to the rise of a brand new sporting league. As the first season continues, league officials and teams alike will have the opportunity to iron out some wrinkles and improve on what has been a successful start.