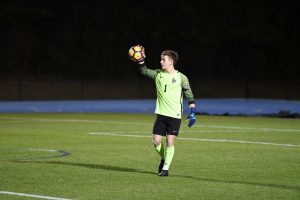 After last season’s difficult run, where the boys varsity soccer team finished their season with a losing record and failed to make the playoffs, the team opened its season with a solid 4-2 victory over Dunwoody High School followed by a 2-1 win over Southeast Whitfield. The team is currently 5-3 for the 2019 season, after their 1-3 loss against 7A team Lakeside High School on Feb. 26.

The team hopes to build upon the successes of the second half of their 2018 season and there is much reason to be hopeful, particularly since the 2019 roster contains many returning players. There was only one senior player on last year’s team, so the majority of the 2018 team remains intact, with the notable addition of nine freshmen.

Key contributors are sophomores Noah Prout and Chase Austin, juniors Cole Ankenbrandt and Jesus Tadeo and senior and captain Max Creasman, all of whom are veterans of the team. Additionally, seniors Lawson Stricker, Colm Pelletier and Harrison Husk bring their assets to the team for their final season. Head soccer coach Lucas Moreno returns for his third season. “Our record last year was not a reflection of the depth and talent of our team and we expect to have a better record this season,” said Ankenbrandt.

The team’s leaders have a positive attitude towards the upcoming season. “We are definitely a better team this year than we were last year,” said Creasman. He notes the crucial addition of offensive power. “We are a lot more technically skilled and talented than last year, but we just need to consistently play to a high standard,” he said. “This year we are looking at the season one game at a time and our goal is to make the playoffs in addition to pushing for the top seed in the region.”

In addition to Coach Moreno, computer science and robotics teacher Charlie Bryant took on the role of assistant coach this year. “The varsity boys soccer team is off to a great start to the season, opening 2-0 in region play,” said Mr. Bryant. “We’re a young team, with seven out of our 11 starters being freshmen or sophomores, but even so we already have the quality to be successful this year.”

The team will need the new underclassmen to make a meaningful impact if they hope to improve over last season’s record and make it to post-season play.  The Knights next take on Stone Mountain High School on March 12 at home.