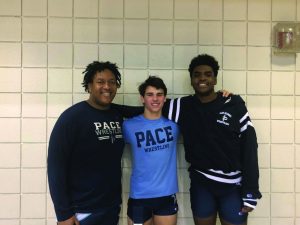 (L-R) Seniors Chilton Tolliver, Charlie Warren and Ahsan Hennings were the leaders who set the tone for a successful season. Photo: Charlie Warren

The wrestling season has ended, with senior Charlie Warren becoming the 11th wrestler in Pace history to pass the 100 win mark. Warren finished the regular season with a record of 42-8, including 32 pins, and a career record of 112-36 with 78 pins. Freshman George Blaha broke the Pace freshman wins record at the end of the regular season, with 32 wins, surpassing the previous record of 29 wins held by Frank Houser ’18.

Three wrestlers – Warren, junior Connor Husk and Blaha – qualified for sectionals. “I was really excited to qualify for sectionals and have the opportunity to build on my regular season and try to get to state,” said Husk. When the results came in, Warren had finished fourth in his weight class, and Blaha had finished third, with both qualifying for the state meet.

“The fact that a freshman and a senior made state speaks a lot about the dynamic of the team,” said junior Blaise Reyes. The team was very young this year, with 11 freshmen wrestling. However, the senior leadership and displays of hard work had an impact, resulting in great results for all freshmen, particularly with Blaha’s state qualification.

The state meet took place Feb. 14-16, with the Pace wrestlers competing on the 15th. In the AAA 106 lb. weight class, Blaha advanced past the first round before falling to an eventual quarterfinalist. Warren did not advance, but both Blaha and Warren advanced in the consolation bracket, earning top 12 spots in the state. “I thought the team and these wrestlers worked very hard this season and I was extremely proud of the results,” said head coach Gus Whyte. “I am excited to see what the future holds.”

With a 13-13 final record, and many of the team returning next year, the team is poised to muster up another state run.